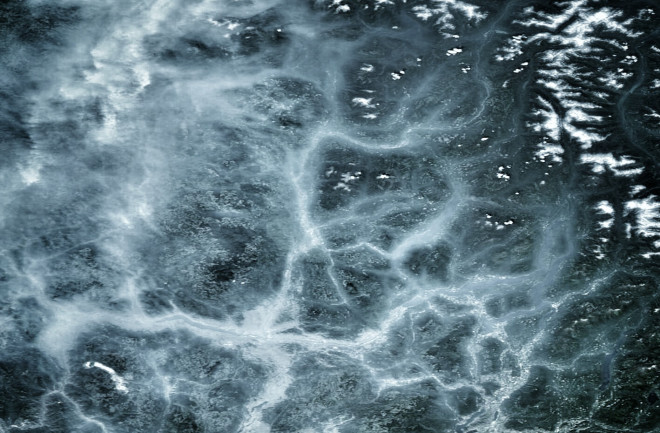 Wildfire smoke filling valleys in British Columbia creates an abstract pattern in this highly processed image based on data acquired by NASA's Aqua satellite on July 16, 2014. (Source image: NASA. Processed image: © Tom Yulsman) By mid-afternoon on Saturday, July 19th, raging wildfires in Oregon and Washington had consumed 947,583 acres, according to the Northwest Interagency Coordination Center. That's an area more than three times the size of New York City, and up from a bit more than 300,000 acres on Thursday. About 100 homes have been destroyed in Washington, and many more have been threatened. So it is without question a terrible situation. But in one satellite image of an area to the north in British Columbia, I found a kind of savage beauty — an almost abstract, tendril-like pattern created by smoke filling a network of river valleys.

Source: NASA Earth Observatory I spotted the phenomenon in an image posted yesterday by NASA's Earth Observatory. Click on the thumbnail at right to see the original image, acquired by the Aqua Satellite on Wednesday, July 16. Look in the upper left quadrant for the pattern that caught my eye. To call attention to the abstract pattern, as opposed to the natural phenomenon of smoke filling the valleys, I decided to do some digital post-processing. The result is the wildfire abstraction image at the top of this post. My intent was not to create an accurate portrayal of the scene as seen by the satellite. Instead, I was hoping to produce a derivative image that conveys a sense of menace while also being visually compelling. If you've got a minute to comment below, let me know what you think. Meanwhile, the Northwest may finally get some relief starting Tuesday in the form of cooler, wetter weather . Let's hope so.