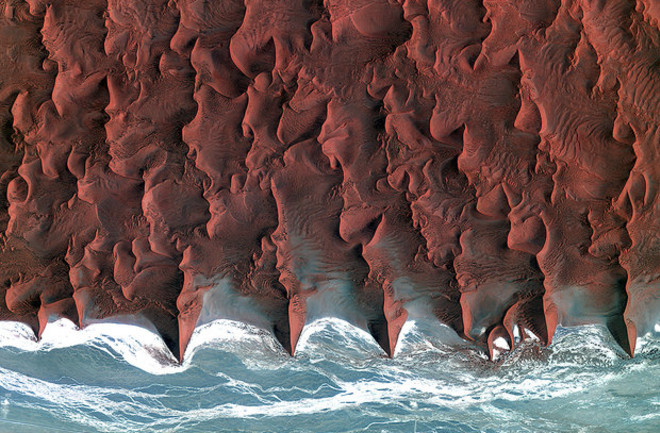 Korea’s Kompsat-2 satellite captured this image over the sand seas of the Namib Desert on January 7 2012. (Image: KARI/ESA) You have to wonder after looking at this image whether nature has an imagination. I know it doesn't, but still... You're looking at sand dunes in the Namib desert, as seen from space by Korea's Kompsat-2 satellite, along with an ephemeral, braided stream called the Tsauchab, which rises in the Kauklift Mountains. The waterway carries water only when rain falls in the mountains. In the bone dry Namib desert, those flows are pretty few and far in between. But over he course of 2 million years, the river has done quite a bit of handiwork:

Sesriem Canyon, Nambia. (Image: Harald Süpfle) Tsauchab has carved this 6 kilometer long gash through the sedimentary rock of the region. It's alled Sesriem canyon, and it's one of the prime tourist attractions of southern Namibia.