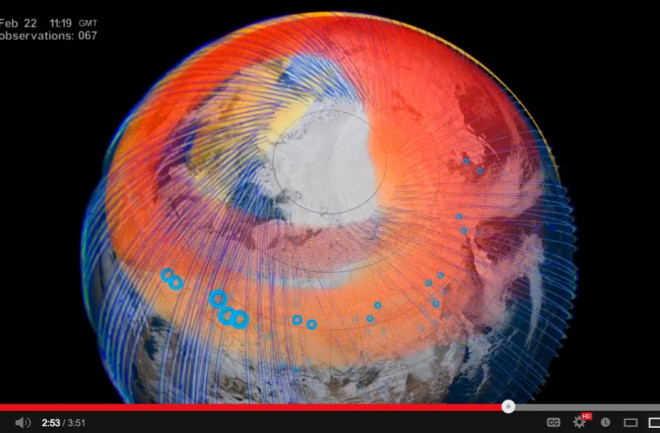 A screenshot from a NASA video showing how the plume of dust from the Chelyabinsk meteor circled the entire globe after exploding in the atmosphere. Click on the image for a larger version, and scroll to the bottom of the piece for the full video. (Source: NASA) On the morning of Feb. 15, 2013, a 24 million pound meteor streaked through the atmosphere above Russia at more than 41,000 miles per hour — and exploded with more than 30 times the energy of the atom bomb that obliterated Hiroshima. Now, scientists using both a computer model and data from the Suomi NPP satellite have learned that a plume of dust from the exploding meteor unexpectedly streamed up into the stratosphere and circled the entire Northern Hemisphere in four days. NASA came out with a video today illustrating how this happened, and how the scientists figured it all out. A screenshot from the video (above) shows the dust plume as it circled all the way around the globe and back to Chelyabinsk. To watch the video itself, keep reading to the bottom, where I've embedded it. You should also check out Corey Powell's story in the Sept. 13 of Discover on developing early warning systems for killer asteroids. He points out that we are still woefully incapable of providing advanced warning of a strike from an asteroid the size the Chelyabinsk meteor. Here's a short excerpt from his piece:

Dashboard-camera video of the white-hot rock streaking through the sky, replayed repeatedly on TV and online, boldly illustrated the threat asteroids pose. The footage also highlighted how little we’ve done about it. Just a few hours of advance notice would have made a huge difference in Chelyabinsk, but no observatory on Earth (or beyond) is capable of such a feat — even though the necessary technology is readily available. John Tonry, an astronomer at the University of Hawaii’s Institute for Astronomy, is working furiously to implement that technology with the Asteroid Terrestrial-impact Last Alert System, or ATLAS. When complete in 2015, the system will be sensitive enough to spot Chelyabinsk-scale asteroids about 24 hours before they strike. For larger objects, the kind that can lead to mass casualties, ATLAS could provide warning of up to a month.