Drought Turns the Rio Grande Into The "Rio Sand"

Before and after satellite images of the Rio Grande River in New Mexico show dramatic change in the Elephant Butte Reservoir. (Images: NASA. Please click on the image to see a larger version.)

Continuing profound drought has left New Mexico so severely parched that the irrigation season along the lower Rio Grande Valley has ended just a month and a half after it started, making it the shortest on record.

This has prompted the Las Cruces Sun-News to proclaim a new name for the river: the "Rio Sand."

In the animated images above, you can see a part of a massive reservoir along the river, Elephant Butte, literally turning into sand. Look for the blue lake in the middle of the frame. This is an image captured in early July 2012 by NASA's Terra Satellite. The second image in the animation was captured on Tuesday (June 14th). The water just disappears...

Elephant Butte Reservoir, now down to 3 percent of capacity, is supposed to provide irrigation water to south-central New Mexico and west Texas. But it won't be doing that at least for the rest of this summer.

If relief doesn't come in the form of monsoon rains (see my post about that phenomenon here), and winter snows in the upper part of the basin, farmers in southern New Mexico and Texas will have no water to grow their crops next summer. The waterbank is simply depleted. 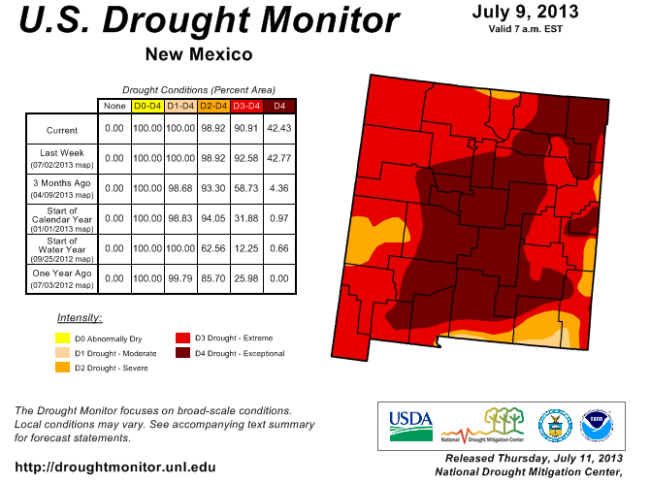 All of New Mexico is in drought, and in 42 percent of the state, the dry conditions are exceptional — the worst category in the U.S. Drought Monitor's rating system. (Map: U.S. Drought Monitor) This map shows why. Almost all of the state is in extreme to exceptional drought. Quoted by the Associated Press, Gary Esslinger, manager of the Elephant Butte Irrigation District, had this to say

: "We’re breaking all the records now of the 1950s and the ‘60s droughts. It’s just not a good year." That seems to be quite an understatement. In any case, using tree rings and other records, scientists have documented droughts much worse

than the current one. If the climate system is indeed an "angry beast," as geochemist Wallace Broecker once said

, I shudder to think what will happen if we keep poking her with our proverbial sticks.