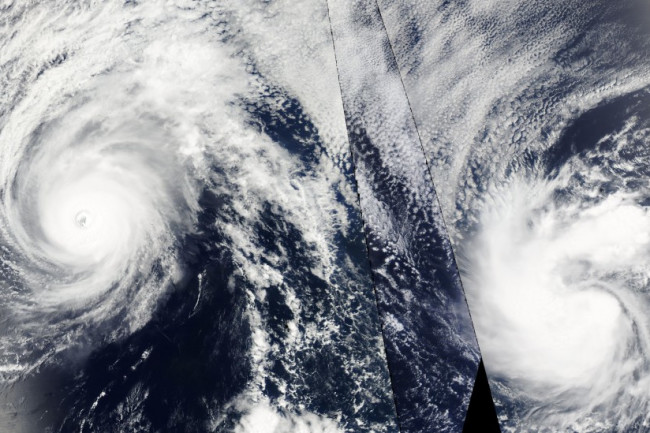 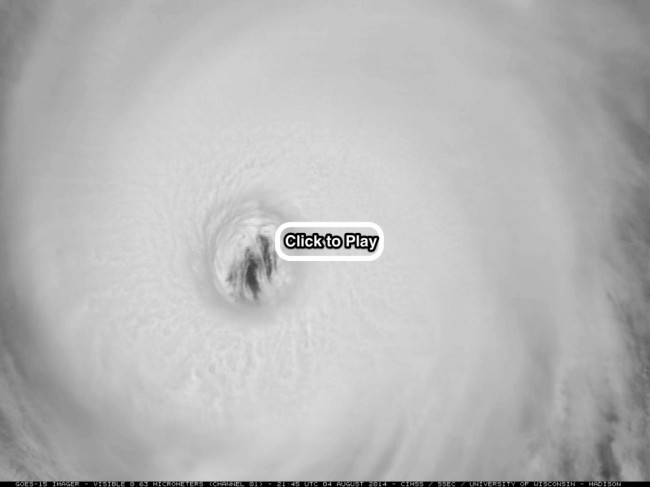 The eye of Hurricane Iselle, as imaged by the GOES-15 weather satellite on Aug. 4, 2014. Click on the image for an animation showing features within the eye known as mesovortices. (Source: Cooperative Institute for Meteorological Satellite Studies) This closeup image of Iselle's eye, acquired on Monday by the GOES-15 satellite, shows both the thick eye wall and features within the eye called mesovortices. Make sure to click on it to watch an animation from the Cooperative Institute for Meteorological Satellite Studies showing these features rotating within the eye. Wind speeds in mesovortices can be even higher than they are in the eyewall itself. They tend to be most common when a tropical cyclone is undergoing rapid intensification. Here's the forecast for Hurricane Iselle, from the National Hurricane Center:

Iselle should retain its current annular characteristics during the next 12 hours or so, and thus only slow weakening is likely. After that time, enough of an increase in southwesterly vertical shear and the ingestion of drier and more stable air should disrupt the status quo and result in steadier weakening. Even further weakening should occur by the time the center of Iselle approaches the Hawaiian Islands in 48-72 hours, mostly as a result of a very dry air mass in which the storm will be moving.

But even though Iselle will likely have weakened to a tropical storm when reaches the area of the Hawaiian Islands, the storm can still cause mayhem in the form of torrential rainfall. And following fast on her heels is Julio. Here's the forecast track:

Source: National Hurricane Center Right now, it looks like Julio will pass very close to Hawaii on Sunday night, and it could wind up being stronger than Iselle when it gets there. Time will tell.