Does this huge warm water blob herald an end to La Niña?

Departure from average of the surface and subsurface tropical Pacific sea temperature averaged over five-day periods starting in early January 2018. The vertical axis shows depth below the surface in meters, and the horizontal axis is longitude, from the western to eastern tropical Pacific. This cross-section is right along the equator. (Source: ENSO Blog/Climate.gov figure from Climate Prediction Center data.) La Niña is still with us and influencing drought and other weather patterns in the United States and elsewhere. But check out the animation above. That large mass of warm water coursing through the depths of the Pacific Ocean may signal that by this spring, La Nada will be with us. The warm blob and other signs have prompted the Climate Prediction Center to peg the odds of La Niña fading to neutral conditions at 55 percent during the March through May season. 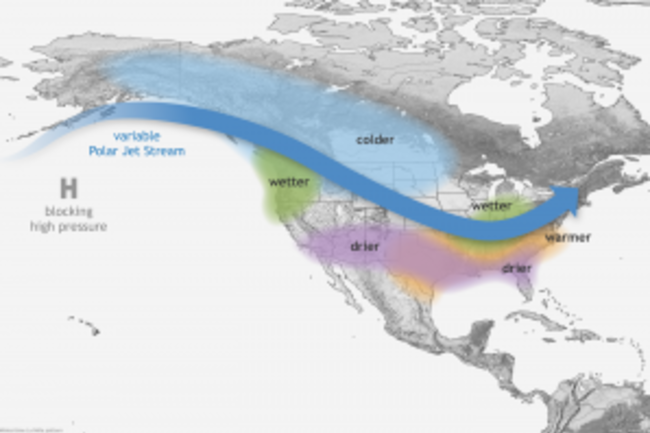 Here's how La Niña tends to influence weather patterns across North America. (Source: NOAA) La Niña — part of the El Niño Southern Oscillation, or ENSO — is characterized by cooler than average surface water temperatures in a portion of the equatorial Pacific Ocean. The atmosphere responds in ways that affect weather patterns far afield. La Niña conditions took hold last fall, and they are still influencing our weather. That includes the warm and dry conditions afflicting Southern California, and the low snowpack in much of Colorado, where I live.

But the warm blob seen in the animation above suggests that we're on the cusp of change. Scientifically, it is known as a "downwelling Kelvin wave." ENSO expert Emily Becker says this mass of warm water has "chased away most of the cooler-than-average subsurface waters, leaving La Niña without it’s steady supply of cooler waters." Writing in a post on the excellent ENSO Blog on the Climate.gov website, Becker elaborates:

This movement toward more neutral subsurface temperatures is one of the factors forecasters are looking at as we anticipate the decline of La Niña. Most of the computer models also foresee this transition, and overall, forecasters have come to the consensus of a 55% chance that La Niña conditions will dissipate by March–May, as the tropical Pacific transitions to neutral conditions.

Becker reports that La Niña's impact on weather patterns has been consistent with what scientists would expect, especially the dry conditions across the southern half of the United States. (Unfortunately, even if La Niña does dissipate by spring, it will likely be too late to help Southern California.) Although the weather has responded in many places as expected, it hasn't done so everywhere. Nowhere is that more evident than in southern Africa, which ordinarily tends toward wetter conditions during a La Niña episode. But parts of the region are into year three of a devastating drought. It began during the particularly strong El Niño episode of 2015/2016. And unfortunately, La Niña does not seem to have dislodged the dry conditions. You may have heard that Cape Town in South Africa is running out of water and has been heading for "Day Zero" in May when the taps are to be turned off due to dwindling water in the city's main reservoir. The city actually received a big downpour last Friday. But it is unlikely to make much difference. Of course, La Niña and El Niño aren't the only climatic phenomena that influence weather patterns. Californians saw this last winter, when the state received copious precipitation that refilled drought-stricken reservoirs. This was despite the fact that we were in the grip of the first dip in what experts call a "double-dip" La Niña. We're in the second dip right now, and it's stronger than the first. Yet contrary to expectations, southern Africa is dry. In the end, with the climate system it's all about odds, not absolutes. And sometimes, some regions defy the odds.