A watercolor of the Rio Grande as it flows through Hatch, New Mexico alternates in this animated gif with a satellite image of the same area. Journalist and adventurer Colin McDonald is getting ready to follow all 1,896 miles of the river by kayak, canoe and on foot. You can help him document the disappearing Rio Grande by contributing to his Kickstarter campaign. (Painting: Matt Morris)

From its headwaters amidst towering Colorado peaks to its mouth in a small delta along the Gulf of Mexico, the Rio Grande flows 1,896 miles — a ribbon of life-giving water through a parched land.

And it is disappearing.

As environmental journalist and adventurer Colin McDonald tells it:

For more than 3,000 years it has supported civilizations and been the lifeblood of the valleys it passes through. Now cities and farms are sucking the ancient river dry, it is evaporating ever faster and being hidden by a growing border wall.

, a program that I direct at the University of Colorado, preparing to head down the river to document the disappearing Rio Grande. In June, he will launch a seven-month journey along the river's entire course — by kayak, canoe and foot. In partnership with The Texas Tribune

, Colin intends to tell the story of the river in real time, "with photos, videos, blog posts and written stories uploaded from the banks of the river via satellite. The content will be free and available for anyone to see and share online." It is an incredibly valuable project — and ambitious as well, requiring some investment up front to pay for equipment, evacuation insurance, a photographer to help document the journey, and other expenses. Colin has begun a Kickstarter campaign to raise the necessary funds

, and he's off to a terrific start, with enough funding so far for the purchase of a bare minimum amount of equipment. But more funding is needed, so I thought I'd let you know about the project and encourage you to contribute. 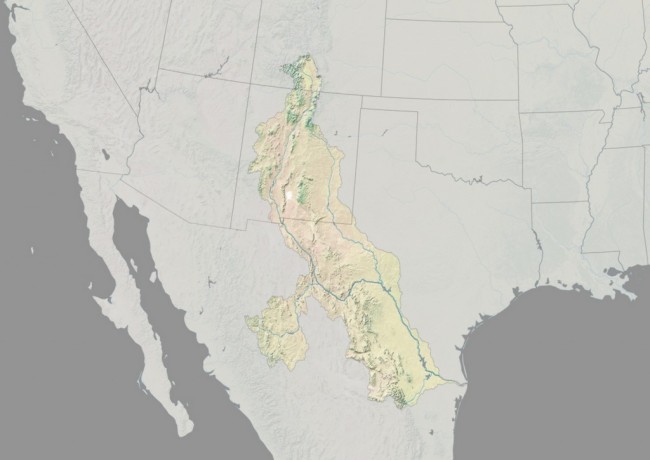 The Rio Grande Basin, covering 8,000 square miles, provides water for more than 5 million people in the United States and Mexico. (Source: NOAA Climate.gov) Contributors will receive a number of thank you gifts. One of them is a print of the painting that forms part of the animated gif at the top of this post. It's a watercolor by Matt Morris of San Antonio, Texas. Matt based his painting on a satellite image of the Rio Grande as it flows past Hatch, New Mexico — the second part of the animation. Here's how Colin describes Matt's work:

The idea for the painting is similar to the USGS' Earth as Art website or the book NASA made to give people a different perspective on our planet. The big difference here is that instead of digital images manipulated by computers, this satellite image was processed through Matt's eye for color and his skill with a brush. Our goal is to show the contrast between the irrigation-dependent agriculture that lines the river and the surrounding desert. This summer farmers on this reach will benefit from some of highest commodity prices ever for the pecans, alfalfa and chilies they grow. To meet the demand the river will be sucked dry.

More than 5 million people in Colorado, New Mexico, Texas and Mexico depend on the Rio Grande's water. But for more than a decade, the region has been in drought, and the demands for water outstrip what the river and its tributaries can supply. To make matters even more challenging, climate change is likely to bring increased water scarcity through higher temperatures and decreased precipitation.

This is why Colin's story is so important. By following the river's entire length, mostly under his own power, he'll provide us with a unique perspective. As he puts it:

This is the best way I know to get at the heart of the complicated story about what is happening to the people and ecosystems that depend on the river. In telling this story, I will also find the clues to what the future of the river will be.

I just made a contribution to Colin's project on Kickstarter, and I hope you will too. You can give as little as a dollar. And should you be inspired to contribute $1,000 or more, you can run the rapids of the Rio Grande Gorge in New Mexico or float through the Canyons of Big Bend National Park in Texas with Colin. He'll handle all of the details; all you need to do is get to the river.