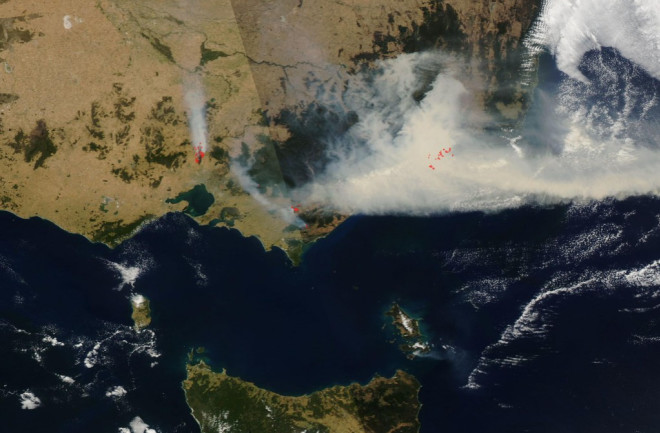 NASA's Aqua satellite captured this view of bushfires blazing in the Australian state of Victoria today. (Source: NASA) Bushfires are continuing to rage across parts of Australia's state of Victoria today despite the arrival of milder conditions. You can see them in the image above from NASA's Aqua satellite. Massive plumes of smoke stream from fires burning in the eastern part of the state, as well as just north of the city of Melbourne. Red dots mark spots where the satellite sensor detected fire. Here's a closeup false-color view of the Melbourne area:

A false color view of the Melbourne area from NASA's Terra satellite highlights burned areas in rusty tones. (Source: NASA) The false-color scheme shows burned ground in rust-colored tones, and active burning in orange colors. A large burn area (whose shape looks a little like a flame) is clearly visible just to the north of Melbourne, which sits on the northern shore of Port Phillip Bay. Agence France Presse is reporting that more than 30 homes have been destroyed. And according to the Australian newspaper The Age, nine separate instances of arson are suspected in at least some of the fires. The region has been experiencing hot and windy conditions that have raised the fire risk in Victoria to its highest level since 2009, when fires killed 173 people. From The Age:

The furnace-like conditions of the weekend - which saw the mercury soar past 40 degrees - eased on Monday but warm temperatures and no chance of rain left the state hanging in a precarious balance with the Country Fire Authority issuing high to very high fire danger ratings.

The hot conditions didn't begin this weekend. In mid-January, the Australian Bureau of Meteorology noted that extreme heatwave conditions were present in southern New South Wales, Victoria and Tasmania. I'll be watching how this develops, so stay tuned.