Earth's seasonal surface temperature for December 2020 through February 2021 was among the top ten warmest on record for the period. 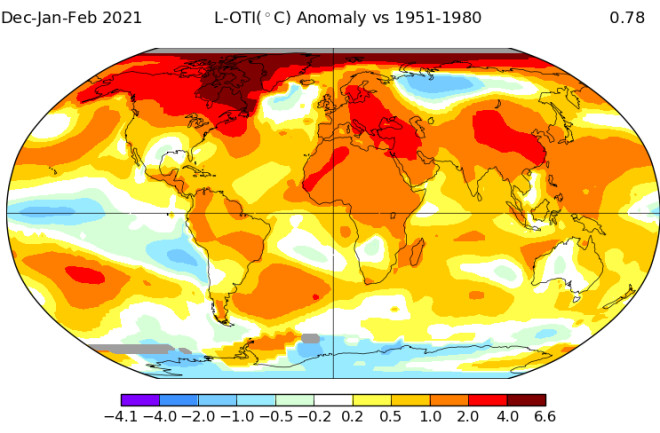 This map shows how temperatures in different regions of the globe varied from the long-term average during December 2020 through February 2021 — meteorological winter in the Northern Hemisphere. (Credit: NASA Goddard Institute for Space Studies)

If you endured the brutal cold that spilled out of the Arctic and enveloped much of North America in February, this may come as a suprise:

For the globe as a whole, this past winter was actually quite warm.

Weatherwise, winter in the Northern Hemisphere (summer in the south) lasts from December through February. And analyses released recently by both NASA and NOAA show that this period was the eighth warmest globally in records dating back to 1880.

"This was also the 45th consecutive December–February period with temperatures, at least nominally, above average," according to NOAA.

Even so, there's no denying last month's brutal cold snap, which treated North America to its coldest February on average since 1994, and the 20th coldest February in the regional 112-year record.

That's clearly evident in February's global temperature map from NASA, above. A particularly profound chill also is evident in a large portion of Siberia — which of course is already bone-rattlingly cold during winter.

But check out all that red and brown color stretching from the Atlantic coast of western Europe all the way east to the Pacific. That huge swath of Eurasia was much warmer than normal. As was most of the Arctic.

These extreme patterns of colder and warmer than average temperatures can be traced to upheavel in the stratosphere over the Arctic. Here, a rapidly flowing river of air circulates between 10 and 30 miles above the surface, from west to east.

As you may have heard, it usually forms a tight ring above the Arctic. This encourages another river of air circulating lower in the atmosphere — the polar jet stream — to behave itself and flow straight and strong, as seen in the left globe in this illustration:

But sometimes, the whole thing goes off kilter. The higher river, the polar vortex, can weaken and even split in two. In response, the polar jet stream tends to meander, creating big oxbows. This, in turn, can allow cold air from the Arctic to flood south in places, and warm air from lower latitudes to surge north, as seen in the right globe above.

In a nutshell, this is what happened in February. And it was all marked by a precipitous drop in the value of a phenomenon called the the Arctic Oscillation. In fact, the AO on February 10th and 11th was so low (-5.3) it tied with two other dates as being the lowest February value ever seen, according to NOAA.

Which is another way of tallying just how wacky things got in February.

February's particulary cold temperatures in North America and Siberia helped tamp down the global average for the month. So did an ongoing La Niña episode. La Niña is characterized by abnormally cool sea surface temperatures across a large swath of the equatorial Pacific, west of South America.

Given the outbreaks of Arctic cold, plus La Niña's influence, by NOAA's reckoning February 2021 clocked in at "just" 16th warmest on record globally. (According to NASA's independent analysis, it was 14th warmest.) I put "just" in quotation marks because 16th in a record of 142 years means February 2021 was still plenty warm.

The color in each tile shows how the global surface temperature varied from the base period of 1951-1980. (Credit: Climate Science, Awareness and Solutions, Columbia University Earth Institute)

To get a feel for just how warm last month was, check out the graphic above, created by Makiko Sato of Columbia University. Each tile represents a month of the year, and the color shows how the global average temperature varied from the long-term average. The last red tile is for February 2021.

Although there are variations from month to month and year to year, the overall trend of cool to warm couldn't be clearer.