Despite Deforestation, Earth Is Gaining Trees As Land Use Changes 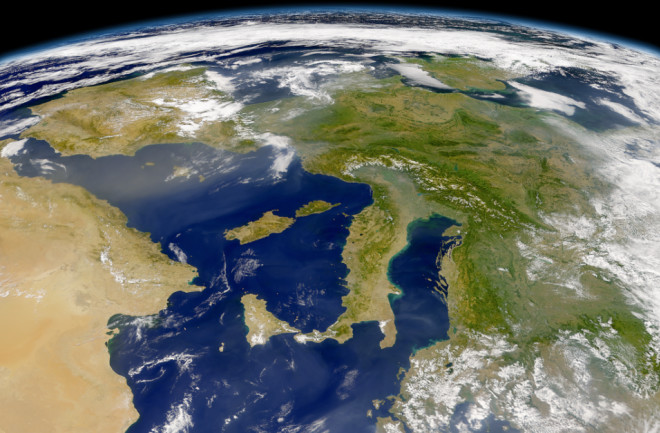 Human land use changes are bringing trees to regions where they've long been absent, even as other areas are rapidly deforested. (Credit: SeaWiFS Project, NASA/Goddard Space Flight Center, and ORBIMAGE) Scientists like simplicity as much as anyone. Elegant equations take up less room, well-designed experiments reduce clutter and Occam’s razor generally advises to keep things simple (within reason). But how far can you take it? Say you want to know the exact amount of tree loss Earth has seen over time — can you look at a bunch of old satellite photos and just compare the greener areas? Well, according to a Nature paper out today, yes we can! The authors did almost exactly that, analyzing 35 years of satellite data to determine the changes in land cover. And while the methods may sound straightforward, the results are a bit less intuitive: It turns out Earth is actually gaining tree cover and losing bare ground cover. It’s sort of good news, and will help scientists better understand and model our planet’s changing climate.

Though the researchers used computers to help them, they really did basically just look at a bunch of old maps, from 1982 through 2016. They went pixel by pixel during local peak growing season — a resolution of 0.05° x 0.05° — and characterized it as tree canopy (TC), short vegetation (SV) or bare ground (BG). (As the authors helpfully clarify in their supplementary methods, “Trees are defined as all vegetation taller than 5 meters [roughly 16 feet] in height.”) Previous studies had focused more on year-to-year changes and had narrower scopes, so this is the first comprehensive look at how ground cover has changed long term over the whole planet. And, while deforestation remains a major problem in the tropics, global tree cover area increased by 870,000 square miles (2.25 million square kilometers), a 7.1 percent change from 1982. Most of the gain came from subtropical, temperate and boreal climate areas. To make room for that growth, bare ground area decreased by 1.16 million square km, a 3.1 percent difference from 1982, and short vegetation went down by 0.88 million square km, a change of decrease of 1.4 percent.

The study authors also crunched the numbers a little bit. They found that 60 percent of these changes were associated with direct human activities, and the remaining 40 percent with indirect causes like climate change. And generally mountains seemed to gain tree cover while arid and semi-arid ecosystems lost vegetation cover. The team also speculated on the reasons behind many of the changes. Europe saw the greatest tree canopy gain of all continents, at 35 percent, which the authors suggest is partly due to “afforestation on abandoned agricultural land[,] a common process in Eastern Europe after the collapse of the Soviet Union.” And much of the loss of bare ground cover was due to the growth of Asian farmlands, which “confirms the effectiveness of China’s large-scale reforestation and afforestation programs, particularly in the Loess Plateau and the Qin Ling–Daba Mountains.” While this seems like great news, it doesn’t negate the destruction of tropical rainforests or other environmental concerns. More data is always useful, and this study will likely help model land-use changes and vegetation-climate interactions, but the biggest takeaway is one the authors end on. “The results of this study reflect a human-dominated Earth system,” they write. Whatever changes we see, for good or ill, are a result of our own actions.