Last September, Robert Kennedy Jr. and Mark Hyman received a letter from the Department of Health and Human Services (HHS). It pertained to a "report" that Kennedy, an environmental attorney and Hyman, a medical doctor, had sent to federal health officials on the dangers of thimerosal, a mercury-based preservative once commonly used in pediatric vaccines in the United States, until the early 2000s. The ingredient is still used in some flu vaccines, which Kennedy and Hyman said was inadvisable. The Kennedy/Hyman report on thimerosal was a draft of the book they are publishing next week. The letter (PDF) from HHS was signed by Bruce Gellin, the Director of the National Vaccine Program Office (NVPO). He explained why U.S. federal agencies would disregard Kennedy and Hyman's advice:

The many federal partners involved in immunizations have closely followed and evaluated the scientific discussion on thimerosal and are well aware of the significant amount of information that has been generated in addressing this question. We have read your report and NVPO and the other agencies are intimately familiar with the complexity of the results and the science that frames your arguments. In addition to a thorough review of the evidence we sought the input of the independent Institute of Medicine on this issue. The conclusion of the scientific community is clear that thimerosal-containing vaccines are safe and effective and do not represent a public health risk. 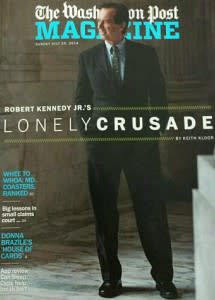 Kennedy and Hyman don't accept this conclusion. My cover story in today's Washington Post magazine is a chronicle of Robert Kennedy Jr.'s relentless efforts to persuade the world at large that the scientific community is wrong on the thimerosal issue. He's pretty much failed. In the process, he's hurt his reputation in the public advocacy world. As I was reporting this story, I learned some surprising things. One is that Kennedy doesn't seem to care that he's hurt his reputation. Oh sure, it bothers him, but not enough to abandon his crusade. When I met with him last year in his home, he was frank about how he's exasperated his closest allies and associates. At one juncture in the interview, he shared his own frustration over their icy response to his then unpublished book:

Nobody wants to read this. Their advice is, 'don't wreck my career, don't destroy my credibility, this is hurting me. My business partner said, 'don't do this, you're going to destroy yourself financially. You're making yourself radioactive.'

To which I asked Kennedy: "What do you tell your business partners and everybody else who tells you to give up? Kennedy's response:

I tell them, 'if I die poor, then I go down fighting for what's right.'

I don't envision him or anyone in the Kennedy clan dying poor, but the sentiment struck me. He then mentioned this: "The team of researchers who worked with me on this [book] were top researchers. People who were cautious, like Mark [Hyman]." That led to the second surprising thing I learned (later on), which was that two of these researchers were bona fide, mainstream science journalists. In fact, they had played a substantive, behind the scenes role in the book. (Due to the emotionally and politically charged politics of anything to do with vaccines, they requested anonymity.) Not that this confers an automatic seal of approval on the book's content (which should be judged on its merits alone), but it did make me go, Huh. As for the book, I have now read it several times. The third and final surprising thing is that I wasn't able to dismiss everything between the book's covers as hogwash. No, I don't think thimerosal is a contributing factor to autism or other neurodevelopmental disorders, as the book argues. Nor do I believe that thimerosal has been proven to be an unsafe vaccine preservative in trace amounts--even with repeated exposures--which is another argument in the book. That said, there is a larger body of science on thimerosal/ethylmercury--such as toxicological and animal studies--that I was not aware of. This is laid out in the book. Do these studies add up enough to indict thimerosal as a dangerous vaccine ingredient for a potentially vulnerable subset of the population? That is a loaded question. I've been promising to dive into the weeds on all this, but I want to be extra careful with how I discuss the book's evidence and arguments. I know that there are many people who would prefer that Kennedy and his book be ignored. But that is not possible if he continues to stoke the controversial thimerosal fires. So check back in a few days for a comprehensive review of the book.