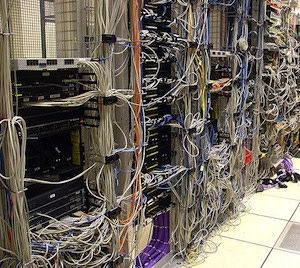 Once I've typed in a message, shared a video, or uploaded a photo to a social media website like Facebook or Twitter, I tend to forget about it. I assume that if I check back days or even weeks later, the status update or tweet will still be there, safely stored...somewhere. That “somewhere” is in one of tens of thousands of data centers, each filled with many, many servers that physically preserve the vast quantity of information flowing over the internet every day. But while it's easy to forget about data centers, they are having a huge impact on our energy grid---and our environment. The New York Times has kicked off a series of articles about the physical constructions on which “the cloud” is built with a piece by James Glanz. As Glanz writes

, data centers not only consume a huge amount of energy, they also waste about 90 percent of what they use by running the facilities on full throttle at all times.

Worldwide, the digital warehouses use about 30 billion watts of electricity, roughly equivalent to the output of 30 nuclear power plants, according to estimates industry experts compiled for The Times. Data centers in the United States account for one-quarter to one-third of that load, the estimates show. “It’s staggering for most people, even people in the industry, to understand the numbers, the sheer size of these systems,” said Peter Gross, who helped design hundreds of data centers. “A single data center can take more power than a medium-size town.” Energy efficiency varies widely from company to company. But at the request of The Times, the consulting firm McKinsey & Company analyzed energy use by data centers and found that, on average, they were using only 6 percent to 12 percent of the electricity powering their servers to perform computations. The rest was essentially used to keep servers idling and ready in case of a surge in activity that could slow or crash their operations.

And to make sure that not even a power failure can take the system offline, data centers also use diesel-spewing generators, which often violate clean air regulations, with the further backups of energy-storing flywheels

. By over-insuring that they stay online and meet consumer demand, these centers are also wasting energy and polluting the environment. For more information, check out the full article

at the New York Times website. But while this comprehensive coverage breaks through the secrecy around data centers to reveal their flaws, the industry is already trying to make these centers more efficient. CNET's Michelle Meyers assembled a few different takes on the Times article

. Her piece points out the changes that internet companies are making to data centers, such as revamping the way power is distributed to each server and cooling the computers with air rather than refrigerants.