Cute But Deadly: Cats are a Far Bigger Threat to U.S. Birds Than Windmills 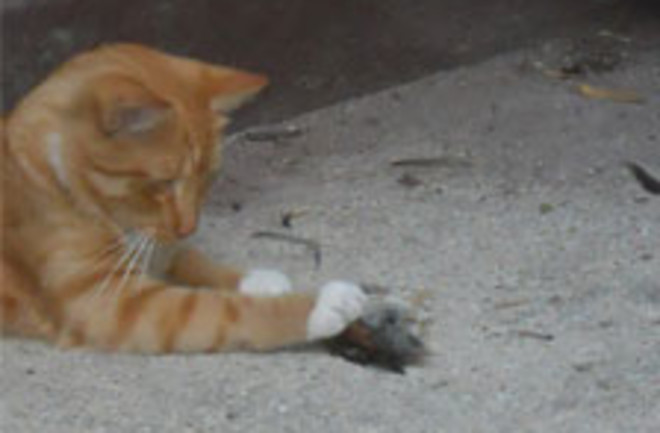 What's the News: After tracking baby gray catbirds with miniature radio transmitters, biologists found that cats were by far the #1 bird killer: 47 percent of the birds died at the paws of pet and feral felines (out of 80 percent that were killed by predators in general). This echoes some biologists’ view that cats are a destructive, human-assisted invasive species: “Cats are way up there in terms of threats to birds — they are a formidable force in driving out native species,” said one of the authors of the study. What's the Context:

Not So Fast: While cats were the biggest threat to birds in this study, the lead author notes that the biggest culprit for bird deaths over all is still building collisions. Reference: Balogh, Anne L., Ryder, Thomas B., and Marra, Peter P. 2011. Population demography of Gray Catbirds in the suburban matrix: sources, sinks and domestic cats. Journal of Ornithology. DOI 10.1007/s10336-011-0648-7 (pdf)