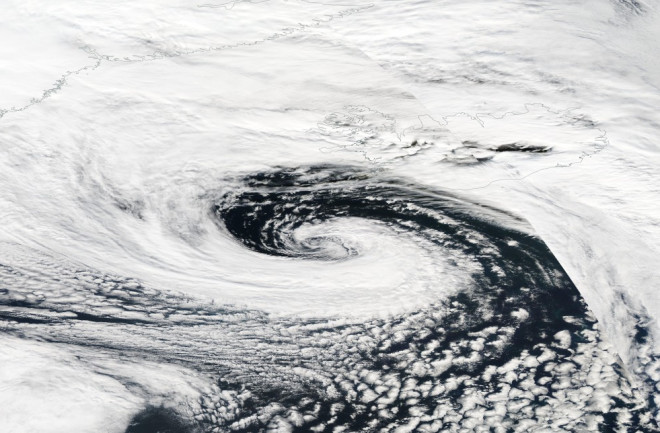 Formerly a hurricane, Cristobal takes aim on Iceland in this image captured by NASA's Aqua satellite on Sunday, Aug. 31, 2014. (Source: NASA) As I'm writing this on Sunday night (Aug. 31), the cyclone formerly known as Hurricane Cristobal is taking dead aim on Iceland. You can see it whirling off Iceland's coast in the image above, captured by NASA's Aqua satellite on Saturday. No longer a hurricane, it is, in the parlance of meteorology, an "extra-tropical cyclone" — a whirling dervish of a storm that has moved far north from its origins in the tropics. To get even more technical, Cristobal may be what's known as a "warm seclusion cyclone," meaning a core of unusually warm and moist air at its center is encircled by colder air, causing that core to be "secluded." The remnants of Cristobal will likely bring high winds and lots of rain to Iceland on Sunday.