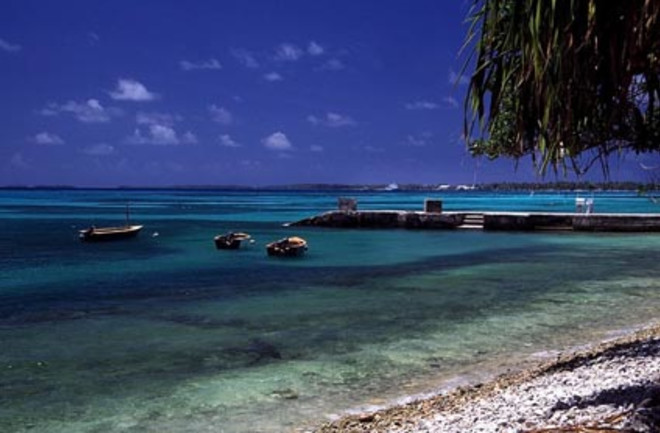 The tiny islands of the Pacific Ocean appear to be the very the picture of climate change vulnerability—some rise such a short distance above current sea level that it seems like any rise would swallow them up. The Earth's climate system, though, is a great deal more complex than the simplistic rhetoric that fills the political echo chamber. That's demonstrated again in a new study that argues some the Pacific's low-lying islands are actually increasing slightly in land area rather than decreasing. It's good news, yes—but not without caveats. First, the specifics. Arthur Webb and Paul Kench published their work, based on decades of aerial and satellite photos, in the journal Global and Planetary Change. During the years spanned by those images, the sea level in the area has been rising by about 2 millimeters per year. Nevertheless, they say that 23 of the 27 Pacific islands they studies either held firm in land area or saw a slight increase. How could this be?

Unlike the sandbars of the eastern US coast, low-lying Pacific islands are made of coral debris. This is eroded from the reefs that typically circle the islands and pushed up onto the islands by winds, waves and currents. Because the corals are alive, they provide a continuous supply of material. "Atolls are composed of once-living material," says Webb, "so you have a continual growth." Causeways and other structures linking islands can boost growth by trapping sediment that would otherwise get lost to the ocean [New Scientist].

, Tuvalu, and the Federated States of Micronesia, who fear the rising seas will swallow up their homes, the idea that these islands might have some kind of resistance to sea level rise is certainly a reprieve. Says Kench:

"We have now got the evidence to suggest that the physical foundation of these countries will still be there in 100 years, so they perhaps do not need to flee their country" [BBC News].

But even if Webb and Kench are right, it wouldn't put the islands out danger in the longer term. As Kench notes, just having an island isn't enough:

"An important question is -- if islands still exist, will they still be able to carry human communities?" [AFP].

This study measures only total land area. It doesn't consider the nature of that land, nor the effects of a shape-shifting island on the people who actually live there.

Even on islands where the total land mass is stable or grows, one area may be eroded while another is being added to. It's not possible to simply move people living in highly urbanised areas to new land, says Naomi Biribo of the University of Wollongong in New South Wales, Australia [New Scientist].

Furthermore, it's not known whether that influx of coral sediment that recharges the islands with material could keep up if sea level rise accelerated past its current pace. And the coral reefs themselves that supply this material aren't in the best of shape, either—marine scientists worry that they won't be able to cope with the increasing acidification of the ocean

, which is another effect of rising carbon dioxide levels. Related Content: 80beats: Forget the Press Coverage: Conflicting Reports on Rising Oceans Are a Fake Controversy

DISCOVER: The Tide Rises—But It's Not the Same Everywhere

Not Exactly Rocket Science: Bacteria and Languages Reveal How People Spread Through the Pacific