Sudden escape of carbon dioxide in the Arctic poses a minimal threat. 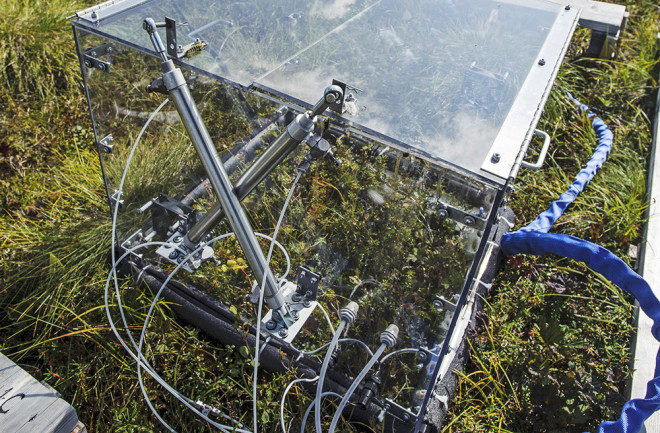 In Alaska, the Carbon in Permafrost Experimental Heating Research project heats tundra in plastic chambers to study the uptake and release of carbon dioxide. | Gary Braasch/Corbis

Sign up for our email newsletter for the latest science news
A bank of thawing permafrost, about 1,400 miles from the North Pole. | AP Photo/Rick Bowmer

Climatologists have long feared an Arctic “time bomb” — a sudden release of carbon dioxide from thawing permafrost soils that would trigger runaway warming. But a study released in April suggests CO2 will escape gradually instead, providing more time to avert the catastrophic consequences.

In Alaska, the Carbon in Permafrost Experimental Heating Research project heats tundra in plastic chambers to study the uptake and release of carbon dioxide. | Gary Braasch/Corbis

Warming frees microbes to convert organic carbon from ancient plants into carbon dioxide. But the study, by U.S. Geological Survey researchers, reveals that much of this carbon is in complex forms that microbes consume only slowly. And permafrost often thaws into waterlogged mud that lacks the oxygen microbes need to process the carbon.

Even so, up to 100 billion tons of carbon could still escape by 2100. That’s equal to 20 percent of all the carbon released from burning fossil fuels in the past 200 years.