UPDATE: 5/7: Climatewire reports that Heartland "faces a mutiny" from donors and its Washington staff over the Institute's billboard campaign, which it abruptly cancelled one day after it was unveiled. The billboards triggered massive outrage and scorn from across the political spectrum. [UPDATE: 5/5: Widespread condemnation of the Heartland billboard campaign (including from Republican politicians and well-known climate science critics) prompted Heartland to discontinue the billboard ads. In a statement, Heartland President Joe Bast called the billboards an "experiment" and intentionally provocative. He also did not express contrition:

We know that our billboard angered and disappointed many of Heartland's friends and supporters, but we hope they understand what we were trying to do with this experiment. We do not apologize for running the ad, and we will continue to experiment with ways to communicate the "˜realist' message on the climate.

Will this staunch the bad publicity and the erase the stain on Heartland's name? Unlikely. Bast's unrepentant response and obvious spin is well short of the damage control a PR expert would advise.] **** Remember when I had fun pointing out the classy way Anthony Watts noted that "Charles Manson is an advocate for global warming"? And remember when Watts, in typically disingenuous fashion, associated climate activists with Osama Bin Laden? I mentioned that bit of ugliness here. Well, that's all minor league stuff compared to the new Heartland Institute billboard campaign that Leo Hickman discusses in this Guardian piece. Hickman strikes exactly the right tone:

It really is hard to know where to begin with this one. But let's start with: "What on earth were they thinking?

This is what saner heads in the climate concerned community were asking when Peter Gleick did what he did earlier this year. The thing about the climate wars is that each side can always count on their opponent to shoot itself in the foot. That's on striking display again, today. 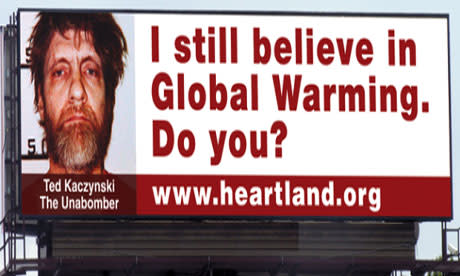 This is a billboard on an expressway in Chicago paid for by the Heartland Institute. In politics, the best ammunition is usually served up unintentionally by one's opponent. (For example, consider how much mileage Obama's team will get out of the etch-a-sketch comment by a Romney advisor.) In this case, a billboard campaign speaks volumes about the character of the Heartland Institute. It is also far more revealing and damning than anything contained in the internal documents that made news several months ago.

UPDATE: I'm keeping tabs on responses/posts/stories as they come in. 5/4, 2:15pm EST. Andrew Sullivan says the billboard campaign illustrates what has become of the Right wing: "A refusal to acknowledge scientific reality; and a brutalist style of public propaganda that focuses entirely on guilt by the most extreme association." Little Green Footballs strikes a similar note: "The Right discovers an all new level of nutso creepiness." Wonkette has some fun playing along with the Heartland game. Ben German at the Hill tallies reaction from environmentalists, who mouth what you would expect. Same for Joe Romm, but he raises the stakes for climate skeptics: "These ads are so extremist that failing to denounce them is an implicit endorsement of the worst kind of hate speech." Charles Pierce at Esquire suggests the Heartland ad campaign is beyond the pale and unmatched on the political spectrum. "This is not the 'mainstream.' Both sides do not do this. There is no 'other side' to this argument." Stephanie Pappas at Live Science has reaction from climate scientists. Anthony Watts at WUWT calls the Heartland billboards a "huge misstep," but (surprise, surprise) focuses all his outrage on his opponents, for their "hypocrisy." Watts' post is a texbook case of classic misdirection. It reaffirms his partisan bent. ***Check back in a few hours for more reax.  430pm EST: Heartland President Joe Bast emails Anthony Watts to say that the billboards will be discontinued today. In the comment thread of that post, it is notable that WUWT readers overwhelmingly disapprove of the billboard campaign, citing its offensiveness. Fox News runs story that leads off: "The Heartland Institute has released a shocking new billboard ad campaign that equates global warming belief with some of the most notorious killers in modern history." The Huffington Post playfully mocks the billboard tagline. Kate Sheppard at Mother Jones reminds us of the not so long ago time when the Heartland Institute was asking for everyone to be civil and respectful. 8:30Pm EST: The strongest condemnation from someone often associated with the climate skeptic sphere has been issued by Ross McKitrick at Climate Audit. It came in the form of a letter addressed to Heartland President Joe Bast. Here's an excerpt:

This kind of fallacious, juvenile and inflammatory rhetoric does nothing to enhance your reputation, hands your opponents a huge stick to beat you with, and sullies the reputation of the speakers you had recruited...You cannot simultaneously say that you want to promote a debate while equating the other side to terrorists and mass murderers. Once you have done such a thing you have lost the moral high ground and you can never again object if someone uses that kind of rhetoric on you.

Andy Revkin has a post at Dot Earth titled, "The Short Hot Life of Heartland's Climate Billboard." It includes an email exchange between Andy, Tom Yulsman (who says some very smart things), and myself. 5/5, 1145am EST: In the Washington Post, Anthony Watts says the Heartland Institute "is suffering battle fatigue.When you're suffering battle fatigue, sometimes you make mistakes." In the LA Times opinion section, Dan Turner writes that Heartland "has decided to stop even trying to be credible in order to attract publicity." Wendy Koch of USA Today writes:

So much for reasoned debate! The Heartland Institute, a controversial group known for trying to discredit climate science, unveiled -- and then 24 hours later withdrew -- billboards that compared people concerned about global warming to mass murderers.

5/6, 9:30am EST: At his blog, Andrew Montford says the "reverberations are going to be felt for quite a while." Then he proceeds, Anthony Watts style, to demonstrate his partisan tendencies by devoting the rest of his post to similar guilt-by-association tactics by climate advocacy blogs. As Leo Hickman lamented on Twitter [shorthand cleaned up] to Montford, "very sad that you, too, like Watts, couldn't resist a 'comparison' drive-by rather than simply condemn." After I seconded this, Montford tweeted: "I'm trying to understand why Heartland's actions [are] considered so much worse than the others." I'm trying to understand how he can't see the difference. Heartland's posters were part of a public advertising campaign that included a detailed explanation for why Heartland believed they were appropriate. While Heartland has discontinued the billboards, it should be noted that they have not apologized or renounced the message they conveyed.