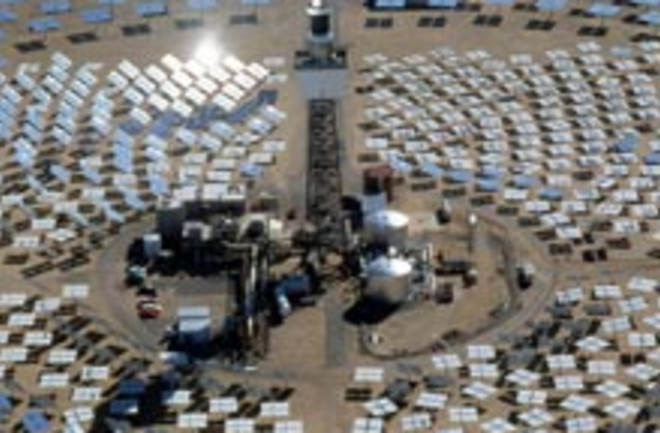 As global warming's effects become evident researchers have turned to geoengineering schemes that could slow the warming process, like a global "sunshade" produced by spraying sulfur aerosols into the atmosphere to reflect sunlight back into space. But a new study points out an (obvious in retrospect) drawback of that idea: It would seriously reduce the effectiveness of some solar energy facilities, which proponents hope would reduce our dependence on fossil fuels and thus prevent further global warming. Researchers from the National Oceanic and Atmospheric Administration went back and examined data from

1991, when Mount Pinatubo erupted. The Philippine volcano ejected about 15 million metric tons of sulfur-dioxide–laden dust into the air, cooling the planet's average temperature by about 0.6°C for nearly 2 years [ScienceNOW Daily News].

The researchers found that the eruption also reduced peak power output at a California solar-thermal plant by 20 percent. Solar thermal plants use arrays of mirrors to concentrate sunlight and turn it into a heat source for a conventional power plant; they are generally cheaper than traditional photovoltaic systems. Lead author Daniel Murphy explains that

particles in the stratosphere reduce the amount and change the nature of the sunlight that strikes the Earth. Though a fraction of the incoming sunlight bounces back to space (the cooling effect), a much larger amount becomes diffuse, or scattered, light. On average, for every watt of sunlight the particles reflect away from the Earth, another three watts of direct sunlight are converted to diffuse sunlight [Photonics Online].

While that switch to diffuse sunlight has little impact on the photovoltaic systems, it seriously interferes with solar-thermal systems.

Researchers say the study's results, published in the journal Environmental Science and Technology, should serve as a cautionary reminder.

Such a reduction [in the power plant's effectiveness] demonstrates the need to pay careful attention "to the potential unintended consequences of employing geoengineering concepts" [ScienceNOW Daily News],

says NOAA researcher A. R. Ravishankara. Other researchers have questioned how sulfur particles would impact the ozone layer, while still others point out that the sulfur sunshade would have to be constantly replenished to avoid a sudden spike in temperatures. Related Content: 80beats: Ancient Agriculture Trick, Not Hi-Tech Engineering, Is Best Climate Defense DISCOVER: 5 Most Radical Ways to Squelch a Climate Crisis (photo gallery) Image: National Renewable Energy Laboratory