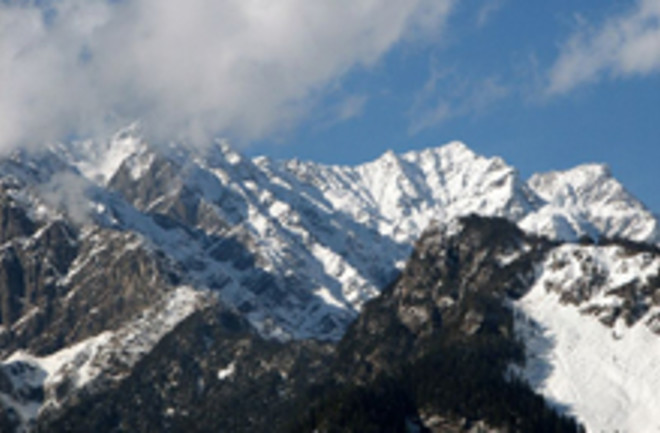 Just when the whole "ClimateGate" affair had retreated from the headlines, other climate scientists have stepped in to shoot themselves in the foot in the public spotlight. In a new slow-simmering controversy that reached major news outlets this week, Intergovernmental Panel on Climate Change (IPCC) chief Rajendra Pachauri admitted that one of the details in the 2007 report was a mistake. Though the goof is a minor one (in that it doesn't change the conclusion of the report), the backlash probably won't be, given what happened the last time around. Specifically, one part of the report states that the Himalayan glaciers are retreating faster than anywhere else in the world, and that there's a good chance they could totally disappear by 2035. But while it's true that the glaciers are retreating, the date given is a gross overstatement. "You just can't accomplish it," says Jeffrey Kargel from the University of Arizona.

"If you think about the thicknesses of the ice - 200-300m thicknesses, in some cases up to 400m thick - and if you're losing ice at the rate of a metre a year, or let's say double it to two metres a year, you're not going to get rid of 200m of ice in a quarter of a century" [BBC News]

. So what happened? A misunderstanding of second-hand information.

The report cited a 2005 study by the World Wildlife Fund, an environmental advocacy group. That study cited a 1999 article in New Scientist magazine that quoted Indian glacier expert Syed Hasnain as saying Himalayan glaciers could disappear "within forty years" [The Wall Street Journal]

. Hasnain has since said that comment wasn't based on good science, and IPCC co-chair Chris Field has said the information looks like it came more from news reports than from scientifically-reviewed literature, which is improper for report like the IPCC's. While the "2035" story hit the major media outlets this week, it wasn't exactly brand new. This round of verbal barbs began last month in India, but glaciologist Georg Kaser said he raised doubts several years ago, and that others pointed to the Himalayan date as goof:

"All the responsible people are aware of this weakness in the fourth assessment. All are aware of the mistakes made," he said. "If it had not been the focus of so much public opinion, we would have said 'we will do better next time'. It is clear now that working group II has to be restructured" [The Guardian]

. IPCC chief Pachauri tried to stress that one bad detail doesn't invalidate 3,000 pages of research—indeed, the glaciers are retreating, but at a speed not even close to that implied by the bad date in the report. He at least acknowledged the political ramifications of the IPCC's goof and tried to spin them in his favor:

"Some people will attempt to use it to damage the credibility of the IPCC; but if we can uncover it, and explain it and change it, it should strengthen the IPCC's credibility, showing that we are ready to learn from our mistakes" [The Times]

. But though it might be inevitable that a few errors sneak into such a mammoth report (and science relies on finding one's mistakes and learning from them), the laxness that allowed an error on an order of magnitude like this makes for a public embarrassment the IPCC can little afford in an already polarized political climate. Related Content: 80beats: Tiny Soot Particles May Be Melting Mighty Himalayan Glaciers 80beats: The Snows of Kilimanjaro Could Be Gone By 2022 80beats: The New Murder Mystery Game: Who Killed Copenhagen? 80beats: Climatologist Steps Down as “ClimateGate” Furor Continues The Intersection: IPCC Leak: Warming of the Climate System is "Unequivocal" DISCOVER: The State of the Climate—and of Climate Science