The year brought new evidence that human activities are altering the climate in ever more obvious ways. 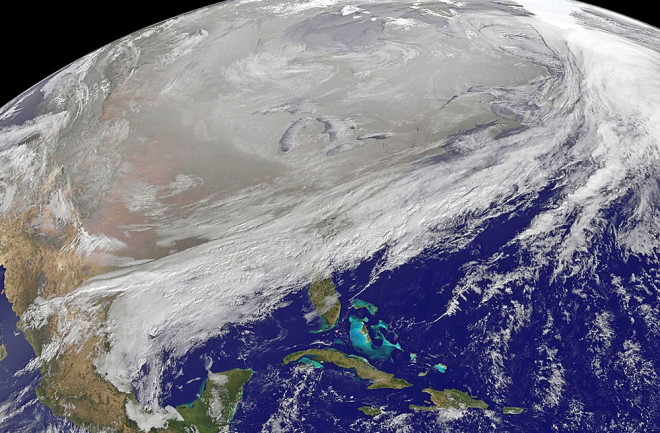 This satellite image from late January 2014 shows the extent of the polar vortex’s reach across the United States. | NOAA/NASA GOES Project

Imagine you’re canoeing the Niagara River when you notice mist ahead. You’re still quite a distance from Niagara Falls, but the river’s swift: There’s no turning back.

These six massive glaciers of the West Antarctic Ice Sheet are picking up speed, shedding ice and raising sea levels. This map shows the pace of glacial flow between 1996 and 2008. Faster-moving areas are shown in red; slower areas are in blue. | Mouginot, Rignot, Scheuchl/University of California Irvine/JPL

Two separate studies published last spring suggest that climate change has carried the West Antarctic Ice Sheet, or WAIS, across a similar threshold. The glaciers that flow off WAIS and dump ice into the sea already have contributed nearly 10 percent to the recent increase in global sea levels. Now, warming seawater intruding underneath has loosened the glaciers’ grip on bedrock, speeding their flow toward the sea and causing increasing amounts of ice to break off into the ocean.

The research suggests that for a large portion of WAIS, this process “has passed the point of no return,” says Eric Rignot of the University of California, Irvine, the lead author of one of the studies. That means the ice sheet is now in irreversible retreat, and steps to slow global warming won’t stop the ice sheet from raising the sea level 10 feet, swamping cities. But there is a silver lining: Full collapse may take centuries, perhaps providing time to move populations at risk out of the way.

Climate Change Is Not in Hibernation

As brutal Arctic conditions gripped large parts of North America in the winter of 2014, it was tempting to think that global warming had vanished.

But along with the notorious polar vortex, the year also brought new evidence that human activities are altering the climate in ever more obvious ways — and that the risks of severe impacts rise with every ton of greenhouse gases emitted into the atmosphere.

“Climate change is real,” says Gerald Meehl, a scientist with the National Center for Atmospheric Research (NCAR) in Boulder, Colo. “Humans are causing most of it, we can measure it better than before, we have good tools to measure it in the future, and it’s going to be ongoing.”

There’s no denying 2014 got off to a weird start. The strong winds that normally corral a pocket of frigid air over the North Pole took a detour, allowing a giant blob of Arctic iciness to drop as far south as the Gulf Coast.

Some declared global warming dead. Others argued it was cold because of global warming, pointing to inconclusive evidence that it had weakened polar vortex winds that normally keep Arctic air in the Arctic.

But while the “Arctic blanket” got all the attention, it didn’t tell the whole story. Just ask a Californian, Alaskan or Finn. The same contortions of the polar vortex that blasted more than half of the U.S. allowed unusual warmth to spread north to Alaska, which was 14 degrees Fahrenheit warmer in January than the long-term average. In California, above-normal temperatures exacerbated a drought that reached historic proportions by summer. And in Finland, warm and wet conditions forced bears out of winter hibernation.

However unusual they may have been, the hot spells here and cold snaps there were examples of weather — the day-to-day variations in the state of the atmosphere. It’s how those variations add up over several decades that gives you climate. And when you look at global averages over decades, it’s clear that climate change has not gone into hibernation. “Each one of the last three decades has been successively warmer at Earth’s surface than any preceding decade since 1860,” Meehl says.

Although decade by decade, Earth’s average surface temperature has risen, that trend has flattened over the past 10 years. In 2014, scientists started to figure out why. At least part of the answer may be that climate measurements are underestimating the amount of surface warming actually taking place.

It’s tricky to take Earth’s temperature because the poles have few weather stations, creating gaps in thermometer data. In a study published in February, scientists found that when satellite and other data are used to fill in the blanks for the Arctic — where glaciers and sea ice have been shrinking rapidly — a stronger global warming trend emerges.

“If you put the Arctic back in the picture, there’s much less of a slowdown in global average temperature, and nothing that looks like a plateau,” says Richard Alley, a climate scientist at Pennsylvania State University. It also looks like nature is tucking a lot of heat away in the deep oceans. Research published in 2014 by Chinese and American scientists pointed to heat plunging into the Atlantic Ocean as a major factor in the leveling off of global surface temperatures.

Meanwhile, a study by NCAR senior scientist Kevin Trenberth and colleagues suggested that the Pacific Ocean is playing the most significant role, thanks to a phenomenon called the Pacific Decadal Oscillation. The oscillation is a pattern of climate variability akin to El Niño and La Niña — weather patterns caused by periodic warming and cooling of ocean temperatures in the Pacific — except it is longer-lived. It has been in a cool, La Niña-like phase for 10 years, causing heat to sink deep into the Pacific. The oscillation also has triggered a chain of atmospheric waves — rippling out like a boat’s wake — ultimately making Eurasia in particular cooler than it otherwise would have been, Trenberth says.

Couldn’t this cool, La Niña-like state go on for a while? As 2014 progressed, there were hints that it might not. First, the opposite of La Niña — a warmer, El Niño condition — began to emerge in the Pacific early in the year. And that summer turned out to be the warmest on record, putting 2014 on track toward record global warmth.

And symptoms of global climate change are already widespread — and growing. A report in 2014 from the National Oceanic and Atmospheric Administration pointed to human-caused climate change as a significant influence on some extreme weather events in 2013 — notably heat waves in Europe, Asia and Australia. And overall, climate change now affects agriculture, human health, ecosystems, water supplies and the livelihoods of people, according to a major 2014 report from the Intergovernmental Panel on Climate Change. “In recent decades, changes in climate have caused impacts on natural and human systems on all continents and across the oceans,” the report notes.

Agricultural impacts are of particular concern, since the global population is expected to increase from more than 7.1 billion people to about 9.5 billion by 2050. To feed all those people, agricultural productivity will have to keep pace. But according to the IPCC, climate change already has slowed productivity for some crops. For example, global wheat production has dropped 2 percent per decade in the past 30 years.

Looking forward, research published in late July showed that expected climate change over the next 20 years substantially raises the risk that rising food production will fail to keep up with increasing demand.

“These kinds of studies should be a reminder that we are changing the climate enough to create consequences on things like our livelihoods and what we expect of food availability,” says Claudia Tebaldi of NCAR, a co-author of the study. “We are playing around with things that are important, and we should do something about slowing the pace of change, if not reversing it.”