The 7th annual March Mammal Madness Tournament (MMM) is upon us! What is MMM, you ask? Only the most engaging, riveting, and scientifically accurate bracket-based tournament around! Eighty-two contenders enter, but only one (or this year, perhaps two) will be the Champion! March Mammal Madness was developed in 2013 by Dr. Katie Hinde, a professor at Arizona State University (ASU),  who created a bracket of 64 mammals in four divisions and then determined the probability of who would win a given encounter based on the actual physiology, behavior, and environment of the animal. After using a random number generator to determine the winner, Hinde crafted a narrative of the battle, all the while citing her sources…on Twitter. Each year, the MMM team chooses animals (and occasionally non-animals) within four divisions which have a specific theme, such as the Jump Jump division this year, to create a bracket. While there may be animals featured in previous years, they try to diversify the species that are represented. Before the bracket is distributed to the world, the team pre-determines the outcome of each battle in the tournament through the championship. “Then the battles are live-tweeted as a dynamic, play-by-play story, much like someone would watch a basketball game,” Hinde said, in this interview on NPR.“Sometimes animals can displace one another. Sometimes animals can hide, animals can run away. Sometimes they get eaten. Sometimes they actually engage in contact aggression.” To participate in MMM, players fill out a bracket with their choices on who would win in any given scenario, before the Wild Card battle occurs. While scientific facts could (and should, if you want to win) inform choices, many players choose from their heart. Once the bracket is filled out, players can tune in to twitter using the hashtag #2019MMM or following the account @2019MMMLetsGo on selected nights throughout the month of March to discover how wisely and well they chose, through storytelling and scientific references. Scoring occurs at the end of the tournament, points allocated as follows:

In bracket pools, whoever has the most points wins! ASU Library provides step-by-step instructions about how to play:

Since 2013, MMM has grown exponentially in popularity, scale, and impact. This year, the team includes several scientists, professors, artists, college students, and librarians who all work together to coordinate the tournament. In 2017, MMM started providing early access to the tournament bracket to educators who wanted to use it in their classes. As of today, nearly 3,000 teachers received not only the bracket, but also lesson plans and other information to engage over 220,000 students! Mauna Dasari, a PhD candidate at the University of Notre Dame and part of the MMM team, said that the tournament is “often a marriage of old science with new communication. Papers (and whole Ph.D. theses) documenting everyday behaviors get pulled from the annals of science and presented to the public in this completely new platform and style. In academia, we publish these very specific papers that can be hard to generate a lot of public interest, but MMM bridges the gap beautifully.” But what does this have to do with Citizen Science? In previous years, projects registered on SciStarter, such as eMammal , have actively participated in the tournament by tweeting images and facts about the contenders. For example, they posted this great shot of a raccoon, from the Urban Jungle Division in last year’s tournament: And they provided insider information on the snacking habits of hyenas (another 2018 Urban Jungle competitor): 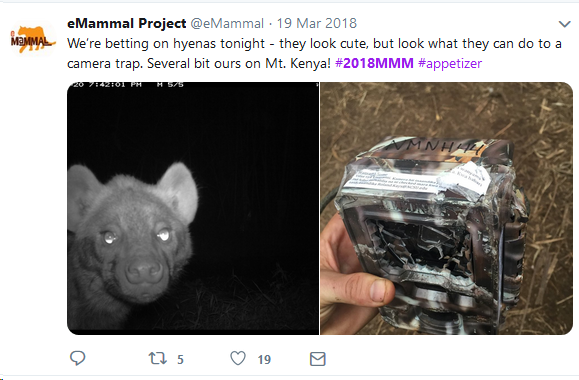 Many other projects may target specific species on this year’s bracket. “Being in the wildlife field for some years, I have known about the MMM for a while, but have never really followed it before. However, when I learned that the tiger salamander was a contender this year I was excited!” wrote Alie Mays from the Nebraska Salamander Search Project. “As part of my position as Watchable Wildlife Biologist for the Nebraska Game and Parks Commission, I coordinate several state citizen science projects. One of these projects Nebraska Salamander Search focuses on recording sightings of the smallmouth and tiger salamanders in Nebraska. So however much of an underdog the tiger salamander might be (rank 13), I will be rooting for their success in round 1.” March Mammal Madness generates an incredible level of excitement and enthusiasm for learning about different animals among a wide audience. Getting more people involved and participating in increasing our knowledge and awareness of the world around us is a goal shared by Citizen Scientists and March Mammal Madness fans alike. True story: I learned about Citizen Science Day during the #2016MMM tournament, which is what inspired us at ASU Library to start getting involved! 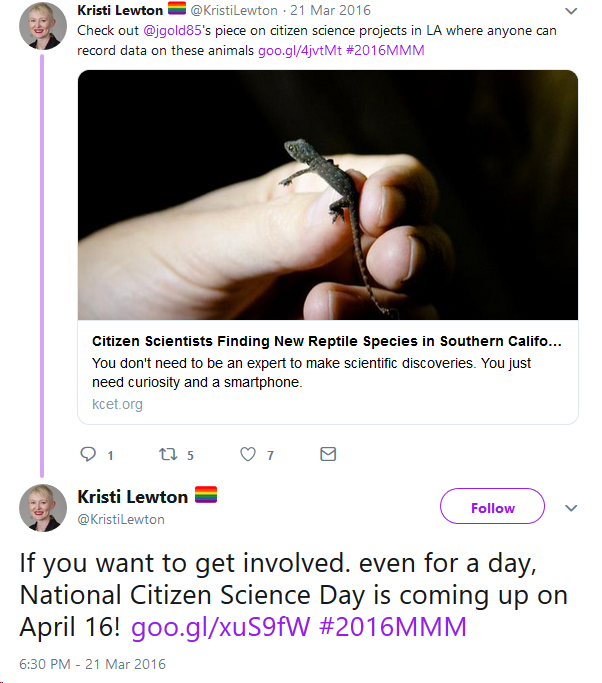 Here are some other citizen science projects that focus on creatures in this year’s bracket:

…and many more! As the organizers explained in this 2017 post, “March Mammal Madness is collective, performance science – the story of animals, told with imagination, creativity and awe for the natural world. We celebrate species and the ecosystems they inhabit, scientists who conduct studies, funders who make the research possible and the irreverence of the human spirit, which makes triumph and defeat opportunities for mad trash talk. This tournament is a love letter to science, about science and from science for all who participate.” So get your brackets, follow #2019MMM on twitter, and let the games begin! The Wild Card battle begins on March 11 and the final championship is on April 3. 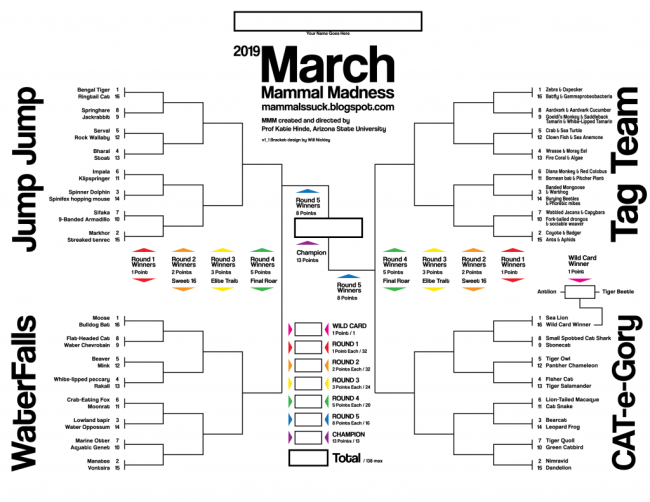 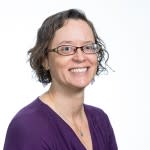 Anali Maughan Perry is the Scholarly Communication Librarian at Arizona State University’s ASU Library. In this role, she provides outreach and education regarding scholarly publishing and copyright, with particular emphasis on fair use, open access to scholarly information, and open education. She enthusiastically contributes to the March Mammal Madness team through administration of the March Mammal Madness Library Guide.