Central U.S. Battered by "Beastly" Cluster of Thunderstorms; 5,500 Lightning Strikes in Half Hour

An infrared weather satellite view shows a massive thunderstorm complex blossoming in the central U.S. and moving into the Southeast. (Source: NOAA) A huge complex of thunderstorms blossomed over the central United States today, battering the region with damaging winds, and also producing more than 5,500 lightning strikes in just a half hour:

Jason Samenow, the weather editor of the Washington Post, is calling it a "beastly cluster of thunderstorms" — and that appears to be no exaggeration. 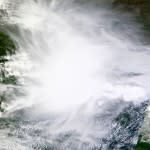 Source: NASA Worldview Meteorologically speaking, it's known as a "mesoscale convective system." According to the National Weather Service, an MCS is a "complex of thunderstorms which becomes organized on a scale larger than the individual thunderstorms, and normally persists for several hours or more." This one developed last night, and as of this afternoon it was moving from Missouri and Arkansas into Tennessee. (Click on the thumbnail at right to see a natural color view of the system captured by NASA's Terra satellite today.) The forecast from the National Weather Service is for a moderate risk of severe thunderstorms in parts of the south:

...SUMMARY... WIDESPREAD DAMAGING WINDS...LARGE HAIL...AND A COUPLE OF TORNADOES ARE POSSIBLE THIS AFTERNOON AND EVENING FROM THE MID-SOUTH TO NORTHERN GEORGIA. ADDITIONAL THUNDERSTORMS...SOME SEVERE...ARE POSSIBLE ALONG THE MID-ATLANTIC SEABOARD INTO THE EARLY EVENING. MEANWHILE...ISOLATED TO SCATTERED STRONG TO SEVERE STORMS ARE POSSIBLE ACROSS THE CENTRAL AND SOUTHERN PLAINS TO EASTERN PART OF THE NORTHERN PLAINS.

The MCS formed and has tracked along a cold front sprawled across the southern U.S. separating extremely humid, unstable air to its south and much cooler, drier air to the north.

This pattern didn't begin today. It spawned a round of nasty thunderstorms that produced softball-sized hail in Nebraska on Tuesday. Click on that link. Trust me... But please come back here and watch this video, which shows a synoptic view from a GOES weather satellite of all the action, starting with the Nebraska thunderstorms on Tuesday and continuing until today's beastly thunderstorm cluster:

Source: Weather Prediction Center I'm afraid to say that it doesn't look like the weather pattern that has spawned all of this nastiness will break up any time soon. Severe weather could continue on into the weekend. Click on the thumbnail at right for the precipitation forecast for the next three days. That splotch of purple, magenta and red looks pretty beastly to me. That said, there may be a silver lining to those monstrous clouds, at least in one area. The Texas Panhandle could pick up yet more precipitation, which would help continue to ease the epic drought conditions that have gripped the region for months.