Cataclysmic Flood Could Have Formed the Mediterranean Sea in Mere Months 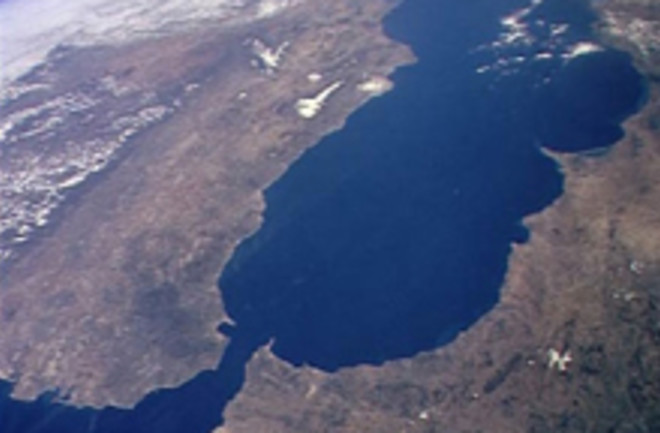 For a geologist, "fast" still means thousands and thousands of years. But in a new study in Nature scientists argue that the modern Mediterranean Sea filled with water in a geologic blink of an eye. A torrential flood of water that moved 1,000 times faster than the Amazon River replenished the once-dry sea in perhaps just a few months, the researchers say. History shows that the Strait of Gibraltar has often determined access to (and thus control of) the Mediterranean, and that goes for the water itself, too.

Around 5.6 million years ago the Mediterranean Sea almost completely evaporated when it became disconnected from the Atlantic Ocean. This was due to uplift of the Strait of Gibraltar by tectonic activity, combined with a drop in sea level [New Scientist]

. When the strait sank just enough to reach the water level 5.3 million years ago, ocean waters began to cascade through and fill the sea. Scientists knew this already. The question was, how fast did it happen?

Geologists figured the resulting flood must have been impressive, but their estimates for how long it took have varied wildly, from 10 years to several thousand years [Science News]

. But the new study's authors, led by Daniel Garcia-Castellanos, say the rush of water was not a mere waterfall over the Strait of Gibraltar, but rather a cascade that broke through the barrier and filled in the Mediterranean in no longer than two years, and perhaps as quickly as a matter of months. It was the Africa-Europe tunnel project, an ambitious proposal to run trains under the Strait of Gibraltar and link the two continents, that led Garcia-Castellanos's team to its conclusion. Rather than bearing a V-shaped bottom like river beds that formed gradually, analysis showed the Strait of Gibraltar's to be more U-shaped. So, the scientists propose, the flood began slowly, but as it picked up momentum it began to wear away rock at the barrier between the Atlantic and the Mediterranean with accelerating speed. That would have filled most of the sea in a geologic heartbeat, and account for the U-shaped bottom.

"The flow of water increased rapidly until it was truly catastrophic," said Daniel Garcia-Castellanos.... "The column of water going down that slope was several hundred metres deep, and in a channel like this would have reached speeds of more than 100km per hour" [The Guardian]