Rather than declining, CO2 levels in the atmosphere are rising thanks to continuing growth in emissions of the climate-altering gas 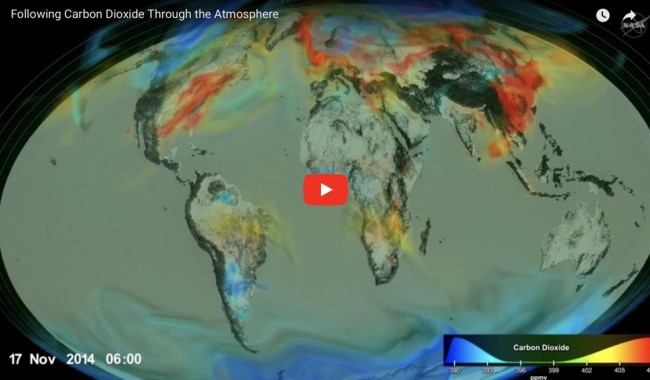 This visualization shows the behavior of carbon dioxide in the atmosphere from Sept. 1, 2014, to Aug. 31, 2015, based on observations and modeling. In May, atmospheric CO2 reached the highest levels ever directly measured. (Source: NASA Goddard Space Flight Center/K. Mersmann, M. Radcliff, producers) The Paris Agreement was intended to turn the world onto a new path, one that would limit the risks and impacts from climate change through lowered emissions of carbon dioxide and other greenhouse gases. But according to the latest indication, we're still on the old path. 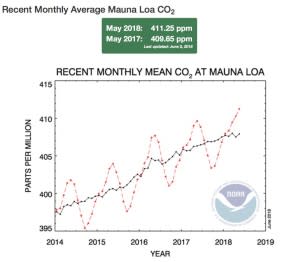 Source: NOAA/ESRL In May, CO2 levels in the atmosphere exceeded 411 parts per million, as measured at an observatory atop Hawaii's Mauna Loa, according to an analysis released yesterday by scientists with the National Oceanic and Atmospheric Administration and the Scripps Institution of Oceanography. That's significant because it's the highest monthly average ever directly measured. It also suggests that 2018 could turn out to be the seventh year in a row with large increases in concentrations of the heat-trapping gas. To put the current CO2 level in perspective, consider that right before the preindustrial revolution — before we ramped up our burning of fossil fuels — the concentration stood at just 280 parts per million. Even more telling: Research shows that you have to go back at least 3 million years to find a time when CO2 concentrations in the atmosphere were this high. And the impact we've already had on the atmosphere will linger for a very long time to come. As Pieter Tans, lead scientist of NOAA's Global Greenhouse Gas Reference Network, put it in a release from NOAA:

"CO2 levels are continuing to grow at an all-time record rate because burning of coal, oil, and natural gas have also been at record high levels. Today's emissions will still be trapping heat in the atmosphere thousands of years from now." 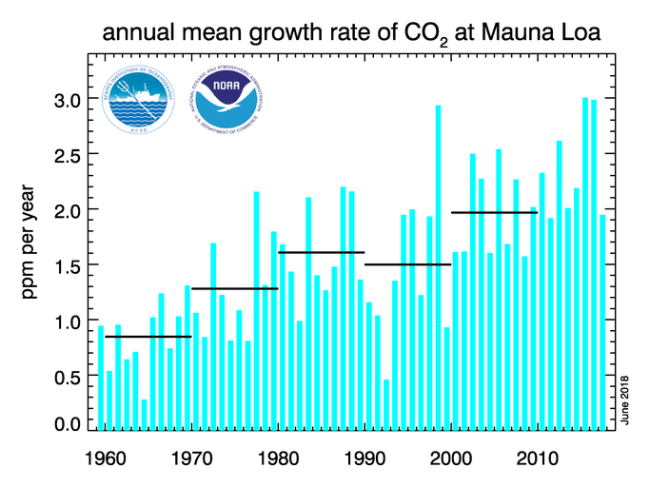 The annual mean growth rates for carbon dioxide in the atmosphere as measured atop Mauna Loa in Hawaii. In the graph, the horizontal lines indicate decadal averages of the growth rate, for 1960 through 1969, 1970 through 1979, and so on. (Source: NOAA/ESRL)

“Many of us had hoped to see the rise of CO2 slowing by now, but sadly that isn't the case,” said Ralph Keeling, director of the Scripps CO2 Program, quoted in a release. “It could still happen in the next decade or so if renewables replace enough fossil fuels.”

Under the Paris Agreement, 178 nations have committed to reducing their emissions of carbon dioxide and other greenhouse gases. The goal: Limit global warming to no more than 2 degrees Celsius over pre-industrial levels. Unless we can get onto another emissions path very soon, it's likely that we'll blow through that goal. 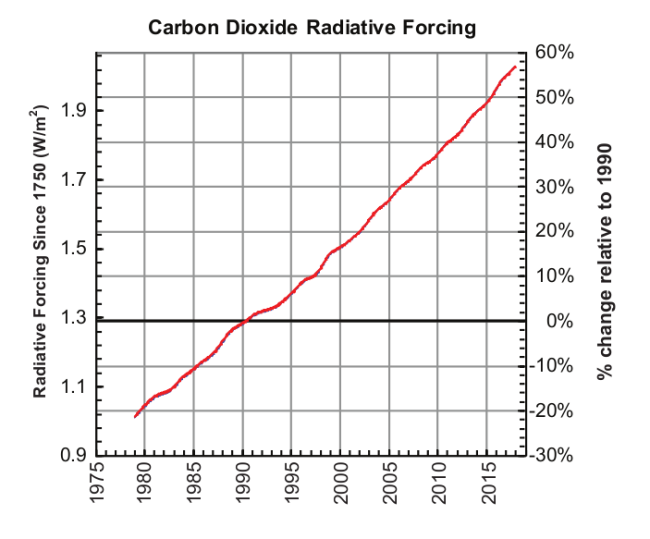 Radiative forcing, relative to 1750, due to carbon dioxide alone since 1979. The percent change from January 1, 1990 is shown on the right axis. (Source: NOAA/ESRL) The graph above may look a little intimidating, but take a minute to consider what it shows: How CO2's impact on global temperature has grown since the 1970s. Scientists call this "radiative forcing" — a measure of CO2's influence on the amount of energy, ultimately derived from the Sun, that is retained in the atmosphere, thereby causing warming. The direct warming influence on the climate by CO2 has risen by 50 percent since 1990. https://youtu.be/rgcE2lMa0Kw Given CO2's impact, it should come as no surprise that the planet's average surface temperature has risen about 2 degrees Fahrenheit, or a little more than 1 degree Celsius, during the last century. Last year was the third consecutive year in which global temperatures were more than 1.8 degrees Fahrenheit (1 degree C) above late nineteenth-century levels. And then there was this news from NOAA

a couple of days ago:

The average May temperature across the contiguous U.S. was 65.4 degrees F, 5.2 degrees above average, making it the warmest May in the 124-year record, according to scientists at NOAA’s National Centers for Environmental Information. This surpassed the previous record of 64.7°F set in 1934, during the dust bowl era. There were more than 8,590 daily warm station records broken, or tied, in May.