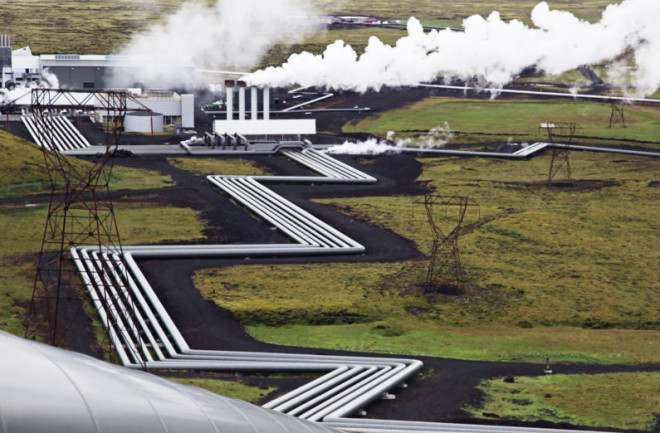 An Icelandic geothermal plant separates the CO2 from steam and locks it below the surface. (Credit: AP Photo/Brennan Linsley)

In June, researchers working in Iceland announced they had turned carbon dioxide into stone. The team captured carbon dioxide emitted by a geothermal plant and injected it, along with water, into basalt rock. The gas mineralized into calcium carbonate, the main component of limestone.

This transformation from gas to solid avoids the pitfalls of other sequestration projects, where carbon dioxide can leak into the atmosphere or groundwater. The project, called CarbFix, won’t act as a global warming panacea because it uses more water than some industrial sites can offer. But its success is noteworthy amid some problematic efforts to pull carbon dioxide from the atmosphere.

Going one step further, another team was expected to announce in late 2016 that it had found a way to mineralize carbon dioxide — without adding any water. Todd Schaef, a geochemist at the Pacific Northwest National Laboratory, says the team’s solution brings the gas to a “supercritical state,” increasing the temperature and pressure before injecting it into basalt rock. Once supercritical, carbon dioxide has properties of both gas and liquid, allowing it to undergo a chemical reaction with the basalt, turning CO2 into stone.

“In an operation that produces a lot of wastewater,” Schaef says, “the CarbFix method will make perfect sense. But where you don’t have that wastewater, perhaps you’d want to go with our approach.”