Can Botanical Tweaking Turn Jatropha Into a Biofuel Wonder Plant?

One company sets out to domesticate the wild, oil-producing weed. 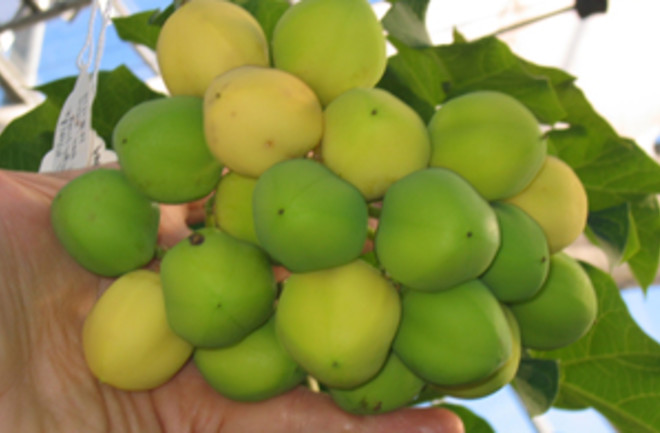 Can a tough and weedy shrub solve all of our energy problems and stop runaway climate change?

Don’t be ridiculous—of course it can't. But that, briefly, was the hype surrounding Jatropha curcas, a poisonous plant that grows wild in tropical climates. Jatropha seeds are saturated with oil that can be easily processed into biofuel, and the hardy plant can grow on what's politely called "marginal land": wasteland that's sandy, rocky, dry, or nutrient-poor.

By embracing jatropha, optimistic environmentalists said, nations could avoid displacing agricultural crops and causing food shortages, and could also prevent forests being cleared for biofuel plantations. Over the past five years, tropical nations rushed to start jatropha programs, while Goldman Sachs reportedly cited the plant as one of the best candidates for biodiesel production. Several airlines have even begun test flights with a jatropha-derived jet fuel.

Then, facts began to emerge to combat the hype. A study published in the Proceedings of the National Academy of Sciences in June confirmed that jatropha can grow on marginal land, and can survive droughts—but it won't do much more than survive, and it certainly won't produce bumper crops of oily seeds. To get the best yields, jatropha needs fertile soil and significant amounts of water, like most other crops. Just last week, the oil company BP withdrew from a partnership with the jatropha biofuel company D1 Oils, which aimed to plant 1 million hectares of jatropha.

But that's not the end of the story for the would-be wonder crop. While "jatropha euphoria" may be fading along with the hope of an easy answer, some are turning their efforts to a hard, slow process that is as old as civilization: the painstaking process of domestication.

"Jatropha really is an undomesticated plant," says Robert Schmidt, chief scientist with the startup company SG Biofuels, which focuses exclusively on jatropha. "All our typical crops have decades, centuries, millennia of domestication to make them most useful to us." The company aims to compress that domestication process into just a few years, to create a new form of jatropha that has fewer needs and produces more oil. As they're starting with a plant whose seed typically contains 30 to 40 percent oil, the company's scientists believe their tinkering has a good chance of paying off.

The company's methods include old-fashioned fieldwork, time-honed crossbreeding techniques, and a dash of genetic engineering. SG Biofuels scientists have been collecting jatropha plants from around the world to assemble a broad variety of strains; the company's "genetic resource center" now contains about 5,500 seeds. Schmidt and his colleagues are now working to identify strains with useful traits, like ten cold-tolerant strains that were found growing high in the mountains of Central America. Using such strains, "we could expand the growing range into southern California," says SG Biofuels president Kirk Haney.

After scientists have identified strains with useful traits—like cold-tolerance, drought-resistance, and above all, high oil yields—those plants can be propagated and crossbred to create the über-jatropha plant.

The results of such a breeding program can be dramatic, says Schmidt. For an example he looks back to the early 1900s, when the British decided to grow wild South American rubber trees on plantations in Indonesia. The plantation owners noticed that 10 percent of the rubber trees were producing about 25 percent of the yield. "It was obvious to them that they should take just those trees and propagate them," says Schmidt. It takes about five years for a rubber tree to grow from a seed to productive maturity, so progress was slow. But after 20 years, rubber yields had increased by 400 percent.

Jatropha, however, has a much shorter generation time. "From the time you plant a seed to the time it grows, matures, blossoms, flowers and produces a seed, it’s about nine months," Schmidt says. With such a quick turn-around, SG Biofuels says they expect to increase the oil yields of the scrubby jatropha trees by 50 to 100 percent in the next few years. Genetic engineering is also expected to augment traits, but that work is only beginning; another startup company, Synthetic Genomics, just announced in May that it had sequenced the jatropha genome.

But domestication won't just bring jatropha plants bedecked with plump, oil-rich seeds, according to some environmental groups—it will also bring new economic pressures that could trump the plant's environmental benefits. Currently, jatropha operations are "better than palm oil plantations in Malaysia where apes are going extinct," says Kate McMahon, an energy policy expert with Friends of the Earth, because virgin forests needn't be chopped down to establish jatropha farms.. "But just because it's better in the small-scale way in which it's being grown now doesn't mean it will always be grown that way. Every time you domesticate and industrialize crop production, there will be other impacts," she says.

If jatropha plants are tweaked to become more efficient and profitable oil producers, growers won't be content to plant their seeds in wasteland, adds Jonathan Lewis, a biofuels campaigner with the Clean Air Task Force. "If the price is right—and the price will be right—it won't just be grown on marginal lands anymore," says Lewis. "Then we’re back in this familiar situation: If it's grown on fertile land, it's either displacing natural land that is doing a great job of absorbing carbon dioxide, or it's displacing agricultural land."

Haney's vision of domesticated jatropha growing on neglected lands and enriching poor farmers could simply be a new round of hype, but Haney insists that his company, at least, is simply trying to accelerate the evolution of a good thing with its domestication program. Jatropha, as it is, may not be the answer to our energy prayers, but jatropha as it could be is still an exciting prospect, he says. That's why SG Biofuels is getting busy in the greenhouse. "We don't have 5,000 years to wait on making a better energy crop," Haney says.