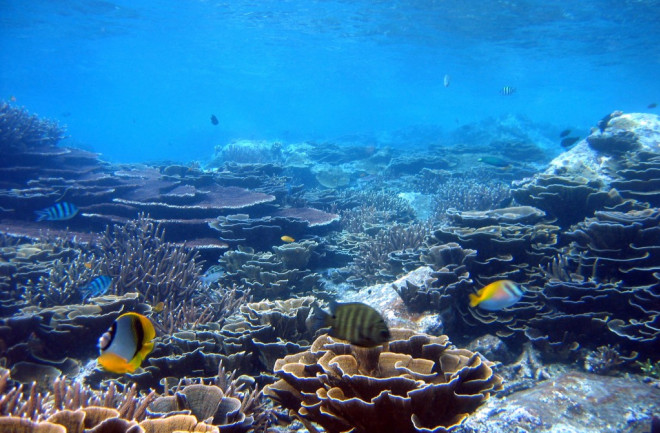 In the September print issue of Discover magazine the infographic "How to Restore a Dying Reef" shows us the current state of reefs in the world. ReefBase, a global information system for reefs, allows citizen scientists to submit pictures, maps, and reports to help conservationists monitor reef status and improve the livelihood of communities dependent on reef resources.

In February of 1998, the waters of the Timor Sea rose rapidly due to El Niño-related sea surface warming. Scott Reef, 150 miles off the coast of Australia, experienced a deadly bout of coral bleaching—photosynthetic microalgae were expelled from their coral habitats with the drastic temperature change, leaving the reef to languish without critical nutrients provided by these symbionts. With no nearby connecting reef systems to reseed Scott Reef with thriving algae, scientists doubted the renewal of the ecosystem. However, 16 years later, Scott Reef now abounds with as much biodiversity as the reef system was originally home to. Nature's success stories like those of Scott Reef shed light on scientists' limited knowledge of how reef revival occurs, a more relevant problem today as anthropogenic effects threaten the ocean's most diverse habitats. ReefBase, a citizen science project run by WorldFish that collects information on reefs from user input, offers data by which scientists and conservationists can monitor reef status and inform reef management. ReefBase hosts a vast and readily accessible database of reports, publications, maps, and pictures of the world's reefs. "It provides key information to support decision-making by fisheries and environmental managers in developing countries, especially those concerned with improving the livelihoods of poor fishers," says Stanley Tan, a manager of ReefBase. Specifically, ReefBase contains information on the location of coral reefs and protected areas, the status of coral diseases and coral bleaching, sea surface temperatures, and even post-tsunami reports. ReefBase encourages users to to submit data, reports, photos, and observations on any of these topics. Reefs face a number of challenges in today's environment—climate change, overfishing, and pollution being the biggest culprits. Some marine habitats have adapted to the dynamic fluctuations of their environments; for example microalgae in the Arabian gulf can tolerate temperature swings of 10°C. However, human-exerted pressures require changes to reef systems that outpace evolution, and as a result almost a third of the ocean’s reefs are already severely damaged. Scientists estimate that 60% may be lost by 2030, jeopardizing not only environmental biodiversity but also fishing industries. Coral bleaching, the phenomenon where photosynthetic algal inhabitants of corals die during stress (temperature or otherwise), can be highly damaging to the ecosystem and is projected to be a major factor in reef loss in coming years with climate change. Bleaching events are less than predictable and are highly variable even within a reef, and consequently scientists are keen to understand what gives rise to the robustness of some algae and the sensitivity of others. ReefBase's detailed information on reef status will provide more data for scientists to approach questions such as these. Furthermore, this citizen science project will give conservationists the opportunity to monitor and protect areas with the most need and help improve the quality of life of reef-dependent people. So far, data contributed by users has enabled ReefBase to develop its knowledge base and to draft other technical information for dissemination. For example, user data was used to publish the World Resources Institute’s Reefs at Risk reports which provide information on global reef management. ReefBase also has location-specific projects that focus on reef data within a particular region. For example, the ReefBase Pacific project aims to improve the quality and accessibility of data and information on reef-associated livelihoods, fisheries and biodiversity in the Pacific. While current efforts for reef preservation wouldn't be the same without efforts like ReefBase, there is much room for progress. Even in developed nations like Australia and the U.S., less than 5% of reefs today are designated as protected areas. So next time you encounter information about a reef, contribute your data to ReefBase and bring attention to these important ecosystems! ReferencesGilmour et al. Recovery of an Isolated Coral Reef System Following Severe Disturbance. Science 340, 69-71 (2013)Want even more citizen science projects? Visit the SciStarter Project Finder to search through 800+ citizen science opportunities!