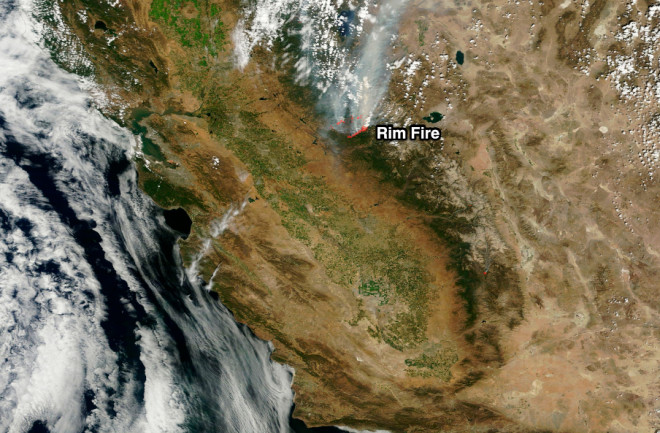 NASA's Terra satellite captured this view of California on Sunday, Aug. 25. The smoke plume from the massive Rim Fire is clearly visible. (Image: NASA) As I write this on Monday morning, California's Rim Fire has grown to 149,780 acres — which is precisely half the size of Los Angeles. You can get a sense of the size of the blaze from the image above, captured by NASA's Terra Satellite yesterday. I've labeled Los Angeles so you can quickly make a comparison. The blaze, which is burning in Yosemite National Park and surrounding areas, threatens the hydroelectric power facilities at Hetch Hetchy reservoir — source of electricity for the city of San Francisco. According to the latest report from Inciweb, it is 15 percent contained, and the growth potential is "extreme." This animated gif shows the explosive growth of the fire on Aug. 21, 22 and 23:

Animated gif based on images from the Suomi NPP satellite. Black, yellow and red pixels show hot spots from the fire. (Image: Cooperative Institute for Meteorological Satellite Studies.) The animation consists of three images captured at night by the VIIRS instrument on the Suomi NPP satellite. The growth of the fire is evident in the expansion of the black, yellow and red pixels, which show areas of active burning. Here's a very different view of the blaze from space: