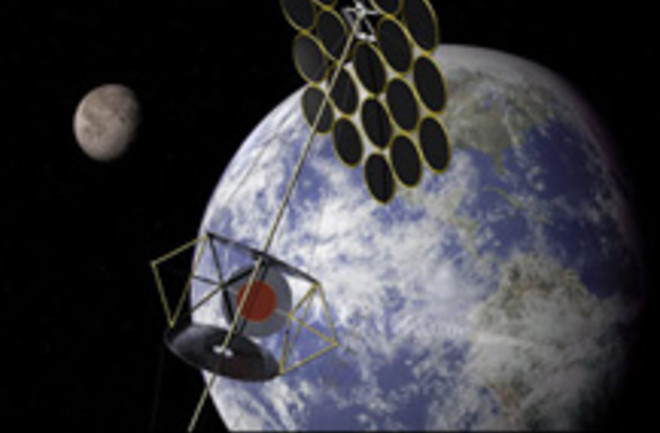 By 2016, the energy powering some California homes may come from solar panels orbiting the planet. California's largest electric utility has announced plans to purchase energy from Solaren Corp., a startup company that hopes to launch the first commercial test of space solar power.

Solaren would generate the power using solar panels in Earth orbit and convert it to radio-frequency transmissions that would be beamed down to a receiving station in Fresno.... From there, the energy would be converted into electricity and fed into [the] power grid [MSNBC].

The idea of space-based solar energ

y has been discussed for decades. It appeared in science fiction as far back as 1941 and later received serious study by NASA and the Pentagon. At times, it has been dismissed as fantasy [San Francisco Chronicle].

But the potential of a solar farm that can generate energy day and night, regardless of the weather, has been enticing enough to keep researchers working on the idea. Now, Solaren CEO Gary Spirnak says the technology is ready for prime time.

"While a system of this scale and exact configuration has not been built, the underlying technology is very mature and is based on communications satellite technology," he said [MSNBC].

The electric utility, Pacific Gas and Electric, has asked state regulators to approve the purchase of up to 200 megawatts of solar power from Solaren once their satellite system is built--that's enough electricity to power about 150,000 homes.

"Emerging technologies like space solar face considerable hurdles," the utility acknowledged in a filing with the California Public Utilities Commission on Friday. However, it added, "PG&E believes that potential, significant benefits to its customers from a successful space solar installation outweigh the challenges associated with a new and unproven technology" [Mercury News].

Solaren says it's committed to beginning its commercial operation by 2016, but to reach that ambitious goal Spirnak admitted that the company will need to raise billions of dollars. However, he believes his company is up to the task.

Solaren's team of satellite engineers, most of whom worked for the Air Force or Boeing's space division, will start designing the solar arrays and satellite, working in concert with contractors in the aerospace industry, Spirnak said. The team will perform test launches to try out their designs before moving to the pilot stage, he said [The Wall Street Joural].

The company's proposed system would require four rocket launches to get the components into space, but once there the parts could be automatically assembled without an astronaut's assistance.

As for the danger of microwave beams from space going astray and burning up the countryside, PG&E referred to a NASA scientist’s paper [pdf] that made the point that such a space beam carries less energy than sunlight, or about 3 percent of the energy of a typical microwave oven — not enough to boil anyone’s blood [Greentech Media].