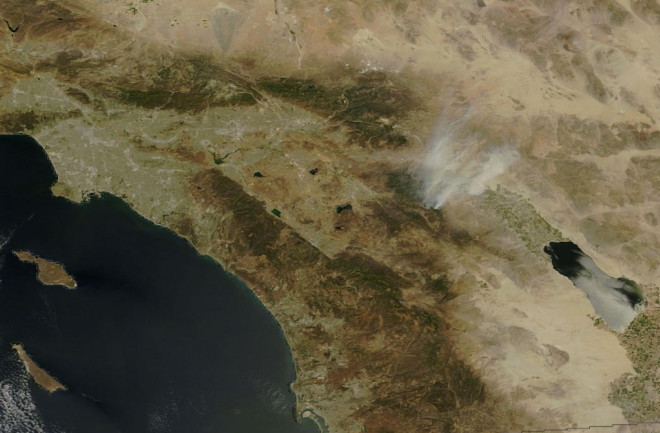 The Mountain Fire as seen by NASA's Terra satellite on Wednesday, July 17. Los Angeles is the large urban area to the west of the fire; San Diego is at bottom center. (Image: NASA) NASA's Terra satellite spied this wildfire burning in steep and rugged terrain in California's San Jacinto Wilderness yesterday, about 10 miles southwest of Palm Springs. Look for plumes of smoke just right of center in the frame. Named the Mountain Fire, it has destroyed three homes, three mobile homes, a commercial building and a variety of other structures, as well four to six vehicles, according to InciWeb, the interagency incident management system. About 6,000 residents in the towns of Idyllwild and Fern Valley are covered by evacuation orders.

Click on the thumbnail at left to see a map of the fire from InciWeb. The blaze started at 1:43 PM on Monday, July 15, and now covers 22,800 acres. Nearly 3,000 personnel are battling the fire, but as of 8 a.m. local time, it was just 15 percent contained. The cause has yet to be determined. Here's a Twitpic of the blaze, taken yesterday: https://twitter.com/caseymornings/status/357871488973561856 California is stricken by extreme drought. According to the National Climatic Data Center, the six month period between January and June has been the driest such period in 119 years of record-keeping:

Click on the thumbnail image to the right to see just how much worse California's drought has been from January through June compared to that same six-month period going all the way back to 1895. I'll be looking for other images and additional information, so check in again.