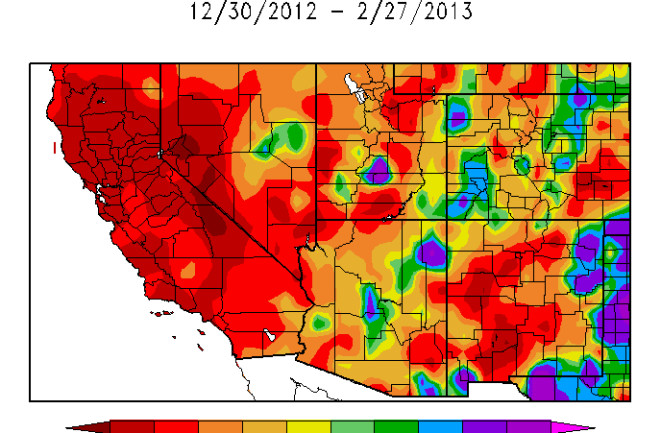 The red colors tell the story of California's epic lack of precipitation since the beginning of the year. (Source: High Plains Regional Climate Center) It has been really dry in California's Sierra Nevada mountains. Epically dry may not be an exaggeration. The entire range has been suffering from lack of snowfall, with the snowpack now standing at just 66 percent of average. But snowpack in the northern Sierra plays a particularly important role in both state and federal water supply systems. And here, precipitation in January and February has been the lowest since modern record-keeping began in 1921. Here is the most recent update from the California Department of Water Resources (which, as I write this post, is performing manual measurements to confirm the disturbing tale told by electronic sensors):

Through February 22, the Northern Sierra 8-Station Precipitation Index shows that the total combined precipitation from January and February of this water year is only 2.2 inches, or about 13 percent of the two month total average. With the current outlook through the end of the month showing dry conditions, this would end up as the driest January and February combined total on record (since 1920). The next driest was 1991 with 4.0 inches. DWR currently estimates that it will be able to deliver 40 percent of the slightly more than 4 million acre-feet of State Water Project water requested for this calendar year by the 29 public agencies that supply more than 25 million Californians and nearly a million acres of irrigated farmland. The delivery estimate may increase as more winter storms develop.

And if things don't change, 2013 will go down as another in a string of years when water deliveries have been significantly below requests by water users. (You can find the specifics here.) Time is running out, since January and February are ordinarily the wettest months of the year in California. An image captured yesterday by NASA's Aqua satellite illustrates the importance of the Sierra Nevada snowpack to agriculture in California:

A MODIS image from NASA's Aqua satellite of most of California. As of Feb. 28, snowpack in the Sierra Nevada mountains is just 66 percent of average for this time of year. The low snowpack is due to the driest January through February period on record. (Source: NASA Worldview) In the image above, the Sierra Nevada runs from lower right to upper left. To the west is the sprawling Central Valley — California's agricultural heartland, and one of the most important agricultural regions in the United States. More than 230 crops are grown in the Central Valley. It comprises less than 1 percent of all U.S. farmland, yet as of 2002 (the last date for which I could find data), the value of its crops represented 8 percent of the nation’s output. This amazing productivity depends on irrigation. Some of that irrigation comes from ground water. But a huge amount comes from melt water flowing off the Sierra Nevada. So if the snow doesn't start falling soon, and in copious quantities, the effects could ripple into the entire U.S. economy in the form of higher food prices. It also bears mentioning that snowpack in the Upper Colorado River Basin — also crucial to water that users depend on way downstream in California — is still well below average for this time of year. And that means the flow of the Colorado River in spring and summer is forecast to be just 50 to 69 percent of the long-term average. One caveat: The U.S. Natural Resources Conservation Service made that streamflow forecast on February 1st. Recent snows in the Colorado Rockies may change the next forecast somewhat. And it's also possible that both the Sierra and the Colorado Rockies could get hit by epic snows between now and spring. It would be much better, obviously, not to have to hope and pray for that.