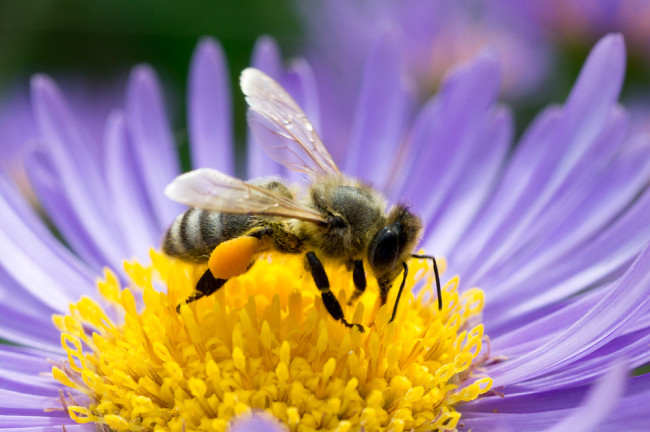 Buzzed bees are proving what javahounds already know: caffeine helps you get the job done.

Honeybees fed a caffeinated sucrose solution were significantly better at remembering floral scents than bees that received a sucrose-only solution, according to research published today

in Science. The findings indicate that caffeine helps bees pollinate more efficiently, and gives naturally caffeinated plants an advantage: Bees remember these plants and return to them more regularly, ensuring continued pollination. Caffeine naturally occurs in a number of plants, including—no surprise—Coffea species such as arabica and robusta, which are used to produce commercial coffee. But the stimulating substance also turns up in Citrus species such as grapefruit, lemon and orange plants, where its levels are high enough to taste unpleasantly bitter and deter would-be nibblers. In the nectar, however, the caffeine levels are lower than in the plant itself, enough to affect bees’ behavior but not enough to impart a bitter taste. In the study, bees fed a caffeinated solution were three times more likely to remember a flower’s scent 24 hours after exposure than bees that received a caffeine-free solution. In the wild, scientists theorized, this would lead to pollination patterns that were more efficient for both bee and plant. “Remembering floral traits is difficult for bees to perform at a fast pace as they fly from flower to flower,” said study leader Dr. Geraldine Wright of Newcastle University, UK. Even though human and honeybee brains are very different, Wright suggested that a similar process may be behind both species’ attraction to caffeine. “This work helps us understand the basic mechanisms of how caffeine affects our brains,” Wright said. “What we see in bees could explain why people prefer to drink coffee when studying.” The study could also shed light on ways to protect and improve the natural habitats of honeybees, which are in significant decline in many parts of the world, particularly Europe and the U.S. “Understanding a honeybee’s habits and preferences could help find ways to reinvigorate the species,” said study co-author Professor Phil Stevenson. “Understanding how bees choose to forage and return to some flowers over others will help inform how landscapes could be better managed.” Image courtesy of lkordela/Shutterstock