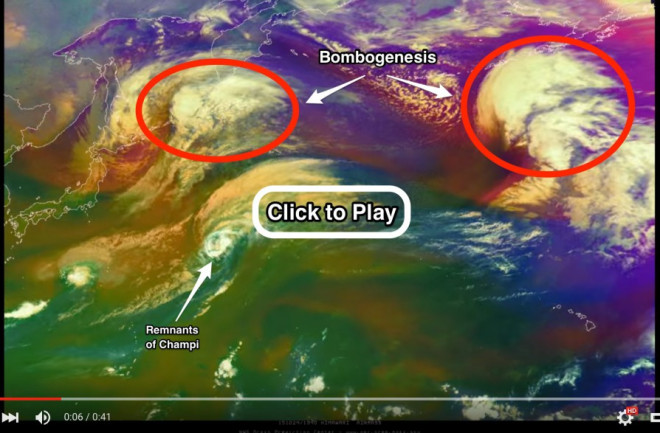 A screenshot from a video showing the rapid intensification, or “bombogenesis," of two low pressure systems in the northern Pacific Ocean between Oct. 24 and 26, 2015. Both developed hurricane force winds. The imagery, captured by the Himawari-8 satellite, also shows Champi transitioning from a typhoon into an intense post-tropical low. (Source: National Weather Service) Bombogenesis! Don't you just love that word? I sure do. It refers to what might also be called a "meteorological bomb" — the very rapid intensification of a mid-latitude cyclone. (For the more technically minded, by "very rapid" I mean a drop in atmospheric pressure of at least 24 millibars over just 24 hours.) It's a pretty cool phenomenon, and between last Saturday and today, it happened not once but twice in the northern Pacific Ocean. The Himawari-8 satellite captured all of the action, and you can watch it by clicking on the annotated screenshot above. Bombogenesis occurs in the two areas I've circled in red. In each case, a low pressure system exploded into a ginormous storm with hurricane-force winds. I've also circled the remnants of Typhoon Champi, which had been wandering about in the Pacific before sweeping northeast as a sub-tropical low that still managed to pack hurricane-force winds. Here's how Jason Samenow of the Washington Post's Capitol Weather Gang described this unusual storm:

The hyper active and record-breaking Pacific tropical cyclone season continues to produce remarkable storms. Champi, the category 3 typhoon in the western Pacific, has formed an eye that is 70 miles wide!