Worldwide deforestation, mining, overgrazing, and the diversion of water have combined to create huge dust clouds that carry bacteria, viruses, soot, acids, radioactive isotopes, and pesticides from Asia and Africa to the United States

By the time the yellow Haze had reached southern Utah, Marith Reheis was already camped out in Canyonlands National Park and trapping local desert dust for the U.S. Geological Survey.

“The weather had been absolutely perfect—not a cloud in the sky,” she recalls. “But that third morning, we saw a patch of sky that just looked weird. It looked like a dust cloud. But there hadn’t really been any change in the wind, and it wasn’t the right color.”

The right color would have been grayish white or red, hues typical of dust clouds churned up in the Mojave Desert to the west. Instead, the cloud Reheis saw that morning in May 1998 was the color of mustard. And it wasn’t from the Mojave: When Reheis returned to her office in Denver, she tracked down satellite images on the Internet and learned that the yellow haze had erupted several days earlier over a broad swath of the Gobi Desert in China. It had swept east across 5,000 miles of ocean. Some of it had landed on the West Coast, from British Columbia to California; the rest moved inland in a slow crawl across the continent.

Reheis wasn’t the only scientist to notice. Meteorologists, oceanographers, remote-sensing specialists, and air-quality experts—not to mention a few air traffic controllers—had all gotten their first overhead view of an Asian dust storm moving across the Pacific Ocean to North America. The phenomenon itself isn’t new. Massive clouds of sediment have been blowing around Earth ever since there was earth to blow and wind to blow it. But using sophisticated Earth-watching satellites launched in the 1990s, scientists around the world have gained a new appreciation for the global scale of dust movement. For example, NASA’s Total Ozone Mapping Spectrometer, or TOMS, launched in 1996, is the first instrument that can track dust storms over both land and sea. Its sensors can distinguish a dust cloud from a rain cloud, and it operates in real time. The Sea-viewing Wide Field-of-view Sensor, or SeaWiFS, another satellite-borne NASA instrument, transmits images in true, vibrant colors and provides global coverage every 48 hours.

These instruments reveal the movement of windborne sediments for thousands of miles. Soft-focus plumes sweep west from North Africa across the Atlantic and north into Europe; they trail from stark expanses of South America; they travel from Asia halfway around the globe. Dust clouds are bigger, faster, and more far-reaching than anyone suspected, and they constitute a truly international geophysical phenomenon—one that has stayed hidden in plain sight all this time.

With a new grasp of global dust traffic, scientists are now working to understand the often subtle effects that dust has on climate, human health, and the biosphere.

Dust storms play a vital role in global ecology. Long before satellite sensors filled the sky, scientists like Reheis sought to identify the provenance of widely spread sediments by collecting samples of airborne dust particles and analyzing their mineral content. The studies show that winds from the Mojave, for instance, supply as much as half of the fine soils on the Colorado Plateau and add nutrients and trace metals that are essential for plant life. Global storms supply fertile topsoil to rocky islands in the Caribbean and the Hawaiian archipelago. Iron-rich sediment from deserts feeds plankton blooms in the ocean and plants in the upper canopy of tropical rain forests.

“Certainly they’re benefiting from it,” says Dale Griffin, a microbiologist with the U.S. Geological Survey station in Saint Petersburg, Florida. “But we’re not.” 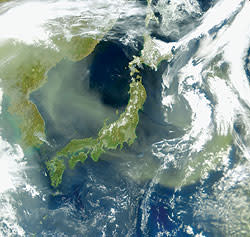 A massive dust cloud from the Asian continent passes over Japan in April 2002, traveling a major dust byway that runs east out of the Gobi Desert. Each spring, a cold air mass called the Siberian High swoops down on the Gobi and hoists soil particles into the atmosphere. Uneven heating of the ground and air generates turbulent airflows that keep sediment aloft. “A moderately wimpy, sustained wind with turbulent gusts will be enough to lift particles into the atmosphere,” says meteorologist Tom Warner of the National Center for Atmospheric Research in Boulder, Colorado. Even a gusty wind of 10 to 20 miles per hour will suffice. When visibility declines to roughly half a mile, a dust storm becomes official. Arid regions like the Gobi can be assaulted as many as half the days of the year. “You’ll see accounts of people being trapped in their tents for a couple of days,” Warner says. Eighty-five people died in northwestern China during a May 1993 storm.

Although dust storms start out gritty, coarse sediments like sand soon fall out, leaving finer silts and clays to rise up to 15,000 feet and travel thousands of miles. In the 1960s an analysis of Hawaiian soil found that some of its quartz content is derived from Gobi sand. Satellite data have since confirmed that a dust corridor extends from China to the Hawaiian archipelago, then continues on to the North American mainland. The Asian dust storm that swept over the West Coast of the United States in April 2001 spread to Cape Cod and eventually reached Europe. In Japan the seasonal dust cloud from China is called yellow sand because of its color, which may be bestowed by pollutants, including heavy metals, that attach to airborne sediments. Roughly half the mercury contamination in the United States comes from Asia; much of it may arrive aboard particles in atmospheric dust clouds. 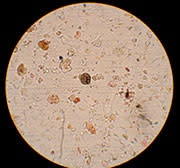 Courtesy of Edmund Blades/Dept. of Biological and Chemical Sciences, University of West Indes, Barbados, and Joseph. M. Prospero/University of Miami 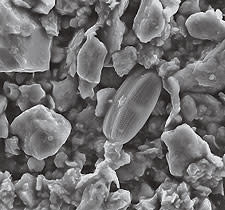 Dust from the Mojave Desert (above left, 2,500x magnification) contains an array of mineral grains, as well as a diatom, a single-celled aquatic organism commonly carried by dust. A sample of African dust, collected in Barbados, carries an unidentified fungus (above right, 1,000x magnification).

More than a hundred species of bacteria, viruses, and fungi have been cultured from airborne dust. Roughly one-third of the bacteria are pathogens that can cause disease in plants, animals, or people. These include pseudomonads, which give rise to ear and skin infections in humans, and the microbes responsible for sugarcane rust, potato dry rot, and banana leaf spot. One fungus, called Aspergillus sydowii, is deadly to the delicate corals known as sea fans.

Some scientists suspect that the alarming decline in Caribbean coral reefs since the late 1970s may be due in part to other, as yet unnamed pathogens imported in African dust. They note that the peak years of African dust deposition in the Caribbean match the years of major die-offs in the region’s reefs.

Saharan dust, carried on seasonal winds, regularly moves north across the Mediterranean into Europe and even western Asia, as this cloud did in August 2004 (below). Although massive movements of airborne sediment presumably affect the weather and the climate, the details of those effects are not fully clear. Clouds form when water condenses on particles of dust, and rain falls when condensed water droplets grow too heavy to be suspended by updrafts in the atmosphere. “But more dust particles don’t necessarily lead to more precipitation,” says Warner. In fact, the addition of dust particles could instead create more water droplets too small to rain down or even build a respectable cloud. “More dust may actually kill off clouds,” he says. Saharan dust does have one visible, albeit rare, impact on Europe’s weather: Pink snow, tinted by iron oxide from African sand, has been reported in countries as far apart as Spain, Poland, and Norway.