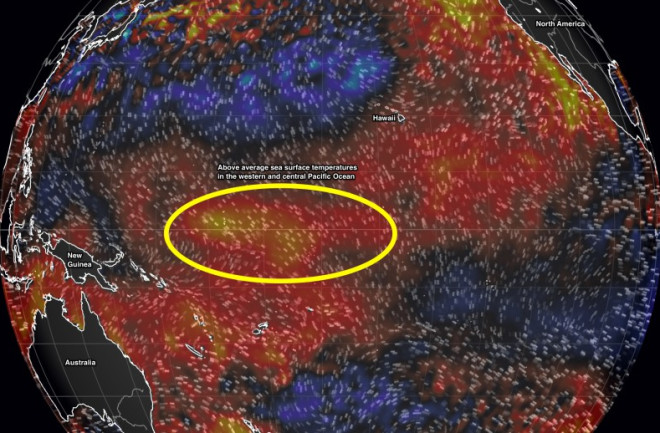 A visualization of how sea surface temperatures vary from average in the Pacific Ocean (as of March 6, 2015). Warmer colors are indicative of warmer temperatures, and visa versa. (Source: earth.nullschool.net) It's more like an El Yawño than an El Niño, but it's here. At last. That was the news from the Climate Prediction Center yesterday. After a year of teasing us, it looks like the Pacific Ocean has finally shifted over to weak El Niño conditions. If it were a normal El Niño, this would probably be good news for moisture-starved California. But this is no normal El Niño. It's really an El Yawño. That's because conditions in the Pacific Ocean have just barely crossed the El Niño threshold. So this one is an extreme weakling, and it has finally come "during a time of year when the influence of El Niño on weather patterns in North America or other locations outside of the Tropics is weakening," writes Emily Becker in the ENSO blog of the National Oceanic and Atmospheric Administration:

Especially since the rainy season in the West is winding down by March, it is unlikely that these current El Niño conditions will lead to substantial, drought-breaking rains.

The Climate Prediction Center pegs the odds of the El Yawño continuing through summer at just 50 to 60 percent. Bad news for California, which has only a month or so for snowpack to build up in the mountains. And right now it is at desperately low levels, as Andrew Freedman points out in his post at Mashable. With all of that as introduction, how have conditions in the Pacific Ocean finally transitioned from neutral to a very weak El Niño? First, consider the image at the top of this post. It shows how sea surface temperatures in the Pacific Ocean vary from normal today, March 6, 2015. I've circled a pool of anomalously warm water in the western and central Pacific. You'd expect something like this during an El Niño. But the problem is that warmer surface temperatures like this need to have an effect on the atmosphere, and visa versa, for an El Niño to occur. For the past few months, there have been hints of this kind of "coupling" — and now it has crossed the threshold. Just barely. The following graphics show how.

Trade winds normally blow from east to west across the equatorial Pacific Ocean. But anomalous bursts of winds blowing in the opposite direction occurred in late January and February. (Images: earth.nullschool.net. Animation: Tom Yulsman) The animation above consists of two images, both showing surface winds in the Pacific (as derived by weather forecast models). The first image shows the normal pattern of trade winds, which blow from east to west along the equator. The second shows a burst of anomalous winds blowing in the opposite direction. This has happened a few times in recent weeks. As Emily Becker puts it in her post:

January and February saw a couple of westerly wind bursts over the central tropical Pacific, and the forecast for the first two weeks of March suggests these winds will continue. When the winds in this region turn more westerly, they can encourage movement of warmer surface waters eastward and either trigger or strengthen downwelling Kelvin waves, leading to warmer SST anomalies in the central and eastern parts of the tropical Pacific.

And that brings us to:

Source: NOAA Climate Prediction Center You're looking at a diagram showing how ocean temperatures below the surface vary from normal. The vertical axis shows the depth in meters. The horizontal axis shows lines of longitude. As you can see, there's a big blob of warmer than normal water at depth. This is a Kelvin wave — a "wave" because it is slowly moving to the east. As it's doing so, the wave is affecting the oceanic thermocline. If you've ever gone swimming in a lake early in the summer, you might have experienced a thermocline: warm water from the waist up, but your legs dangling down into really cold water. The transition between these two layers — the warm, well mixed surface water, and the cold, more uniform deeper water — is the thermocline. It exists in the Pacific Ocean too. And with a thick layer of warm water moving east — that big blob of a Kelvin wave — the thermocline tends to get pushed downward. So scientists call this a "downwelling" Kelvin wave. It's downwelling because the warmth is pushing downward, into deeper depths than normal. And that means it is more difficult for colder water to well up. That in turn tends to keep the near-surface waters warmer than normal.

An animation showing a simplified version of airflow patterns over the equatorial Pacific Ocean during the Northern Hemisphere winter under neutral and El Niño conditions. Note how the columns of strongly rising air shift to the east. (Source: NOAA Climate.gov) But if that was it, we still wouldn't have an El Niño. That requires more coupling between what's happening in the water and the atmosphere. Enter something called the "Pacific Walker Circulation." As the animation above shows, it's a loop in the atmosphere. During neutral conditions, air tends to rise strongly above parts of Southeast Asia and the islands of the Philippines in the Northern Hemisphere winter. (Air also rises over eastern Africa and northern South America, but more weakly.) As this moist air rises, the convection causes clouds to build and lots of rain to fall. But when the trade winds weaken, warm waters slosh eastward, and the ocean starts communicating well with the atmosphere, that strong rising column of air begins to weaken. During a full-blown El Niño, it shifts to the east, bringing less rainfall in the western Pacific and more in the central part of the ocean. Satellites can spot this shift. That's because cloudiness intercepts energy that's radiating up from the surface of the Earth, preventing some of it from getting through and escaping the atmosphere into space.

(Source: NOAA Climate Prediction Center) As cloudiness increases over an area, a negative anomaly in outgoing longwave radiation, or OLR, builds up. Similarly, a reduction in cloudiness causes a positive anomaly. The image above shows what the pattern of those anomalies looked like through most of February. That blue patch in the western Pacific means there was more cloudiness and thus precipitation in that region. And the white patch just a little bit to the east means near-normal conditions. If you've been paying attention, you could be forgiven if you're confused. Yes, I did just explain that cloudiness and rainfall should decrease in the western Pacific and increase in the central part of the ocean during an El Niño. But that's not what the graphic above shows. Sigh... Well, this is one reason why the just-declared El Niño might better be called an El Yawño. And if this situation fails to change... Well, I'm really sorry California!