Better Than a Battery? Here's a Microbe That Could Help Store Clean Energy 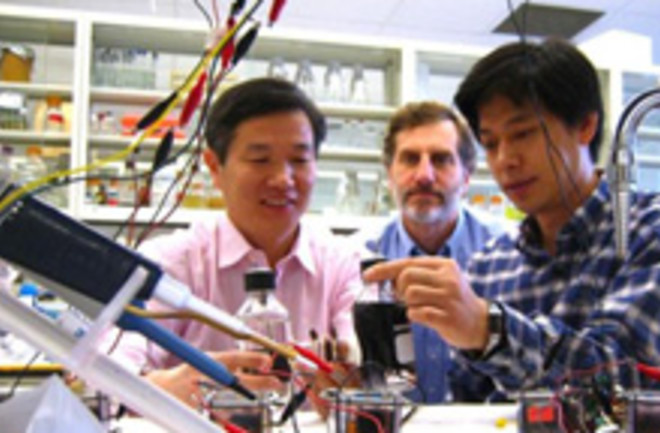 A microbial culture could be turned into a living energy storage system, researchers say, which could cheaply stockpile power from inconsistent solar and wind installations. Proponents of these alternative energy sources are investigating many different ways to store power for the inevitable moments when the sun isn't shining or the wind isn't blowing. The

intriguing new idea involves "feeding" surplus power to the microorganisms instead, which combine it with carbon dioxide to create methane. That could then be stored and burned when needed. The method is sustainable too, as the carbon is taken from the atmosphere, not released from long-term storage in oil or coal [New Scientist].

The researchers have determined that a single-celled microorganism, a type of archaea, uses electricity to convert carbon dioxide and water into methane. Sustainable energy expert Tom Curtis comments

that the use of microorganisms, rather than conventional catalysts, is a plus. "There are no noble metals involved, so it should be very cheap," he says. Of the energy put into the system as electricity, 80% was eventually recovered when the methane was burned – a fairly high efficiency. "You don't get all the energy back, but that's a problem with any form of energy storage," says Curtis [New Scientist].

According to the new study, published in the journal Environmental Science and Technology, the microbe

The microbe acts as a catalyst for the process. Lead researcher Bruce Logan says the simple technology could easily be scaled up for commercial applications. And while the eventual burning of the methane produced would put greenhouse gases into the air again, Logan notes that if the carbon dioxide used by the archaea was drawn from power plant emissions or from the open air, the process would at least be carbon neutral. Related Content: 80beats: Deep in the Jungle, A Fungus Pumps Out Diesel From Wood 80beats: Algae-Filled Greenhouses Aim to Take in CO2 and Turn out Biofuel 80beats: Genetically Engineered Bugs Could Produce Cheap BiofuelImage: Bruce Logan's lab