Beijing Under a Pall of Hazardous Air Pollution — Again

An animation of images from NASA's Terra satellite highlights the severity of air pollution in the Beijing area. The first was acquired on Feb. 8, a clear day; the second on Feb. 14, when a thick pall of hazardous pollution blanketed the region. (Images: NASA. Animated gif: Tom Yulsman) The residents of Beijing once again are suffering from hazardous air pollution, prompting the Chinese government to raise the city's smog alert system to "orange" on Friday — the second highest of four alert tiers. As a result, schools have cancelled outdoor sports, children and the elderly have been advised to stay indoors, some industrial facilities were ordered to curtail production, and outdoor barbecues and fireworks were banned. 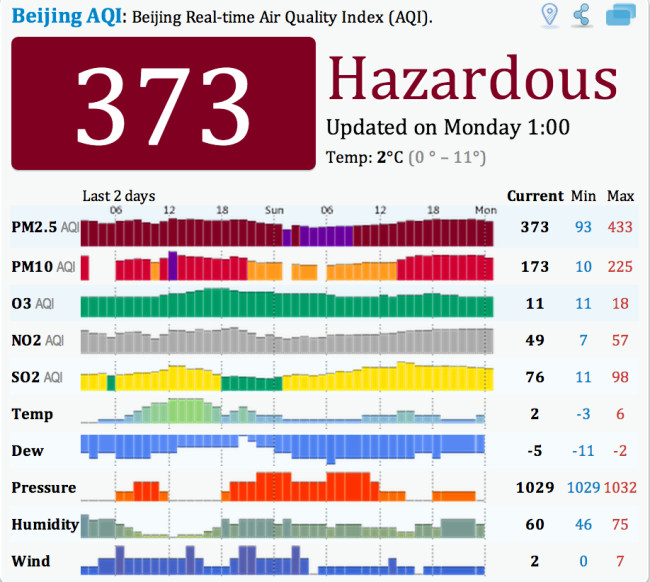 Source: aqicn.org As I write this post it is Monday, Feb. 24 in Beijing (Sunday here), and air quality is at a hazardous level, as the graphic at right shows. (Click the thumbnail for a larger view.) The AQI reading of 373 means that breathing this nasty soup of tiny particulates known as PM2.5 and other pollutants may cause serious health effects for everyone in the population, not just vulnerable folks, like the elderly and people with lung conditions such as asthma. This is obviously not a new problem. Beijing has been suffering from terrible air quality for a long time now, and it tends to be worst during the winter months. During the past couple of weeks, it has been particularly bad. The animation at the top of this post illustrates the problem. It consists of two images from NASA's Terra satellite. The first was acquired on February 8th, when hourly air quality index readings were mostly in the 'good' category. The second image was captured on Feb. 14. On this day, the pollution got so bad that the air quality index literally went off the end of the scale, as this tweet from the U.S. Embassy shows:

You can see the difference between the two dates in the animation. On Feb. 8th, Beijing — the grayish spot at the upper middle of the image — and the city's surroundings were clearly visible. On Feb. 14th, you'd be hard pressed to make out any detail on the ground. Last October, government officials announced a plan to deal with air pollution that consists of a series of steps, phased in as the severity of the situation warrants. The steps include street washing to hold down dust, closure of factories, construction work stoppages, banning of barbecues, and restrictions on driving. (I wrote about it here.) Some of those steps are being taken now. Let's see what impact they have.