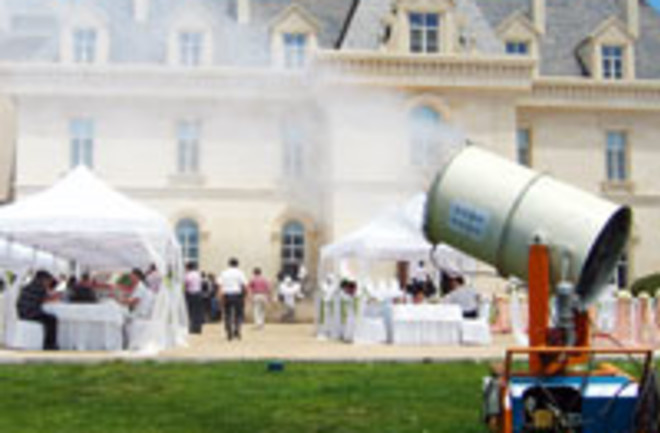 First the smog, then the stink. Beijing's white hot economic growth has led not just to smoggy skies but also stinky landfills that are literally taking people's breath away. Faced with overflowing landfills across the city, Beijing residents have been complaining about the rising stench of garbage that can be overpowering when the wind blows. So, the government decided to remedy the situation by installing 100 giant deodorant guns aimed at the city's stinkiest landfill--the Asuwei dump site on the edge of Beijing. The high-pressure cannons, like the one seen here being used at a public gathering, can spray dozens of pints of fragrance per minute over a distance of 160 feet. In addition to being bathed in sweet perfume, the Asuwei dump site will also get extra plastic layers to cover the garbage so that the smell doesn't waft towards the city when the wind blows. But The Guardian reports that it would take more than a few plastic sheets and perfume guns to zap Beijing's garbage problems away:

According to the local government, the city of 17m people generates 18,000 tonnes of waste every day -- 7,000 tonnes more than the capacity of municipal disposal plants.

The city recycles less than four percent of its rubbish each year, and the city's residents continue to churn out trash too fast for the city to either bury or burn it. City officials want to build more incinerators, but those have pollution problems of their own--six incinerator projects within Beijing have been put on hold due to public protests. So, till those projects are approved, or the till the government figures out another way to take out the collected trash, Beijing residents will just have to spritz and bear it. Related Content: Discoblog: A Year After the Olympics, Beijing’s Air Quality Back at Square One

Discoblog: The Air Over There: As the Olympics End, a Look Back at Air Quality

80beats: 1/3 of China’s Yellow River Not Even Fit for Industrial Use