A stratovolcano sends ash 60,000 feet into the sky. 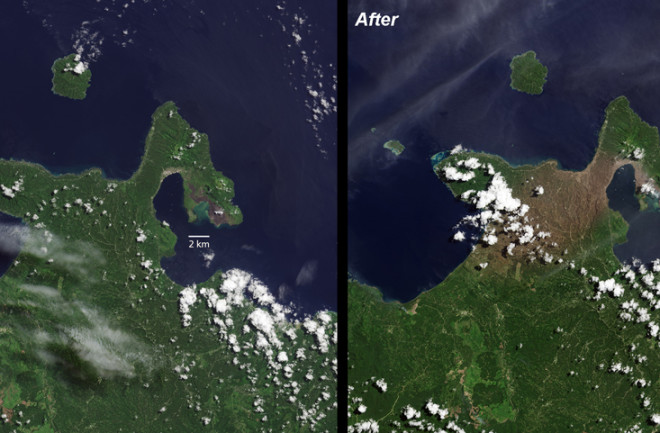 An immense plume of ash rises nearly 60,000 feet above Mount Tavurvur, a stratovolcano in eastern Papua New Guinea, on Aug. 29.

Photographer Joyce Lessimanuaja Bluett captured the early morning blast from her home in Kokopo, about a dozen miles away. The eruption spread ash across a wide swath of eastern New Britain island, as seen in these before-and-after satellite photos taken April 27 and Sept. 2.

Gray ash is clearly visible over otherwise green forest. Several villages were evacuated, water service was disrupted and airlines diverted flights from the area. Favorable winds that day spared Kokopo. Bluett also witnessed the much larger 1994 eruption of Mount Tavurvur and neighboring Mount Vulcan, which destroyed nearly all of the port town of Rabaul, where she lived at the time.

“It was very scary back then as the earthquake was severe two to three days before it finally erupted,” she says. “We lost everything.”

[This article originally appeared in print as "Earth Power."]