Beautiful Badlands and Ogalala Lakota Nation, From Above 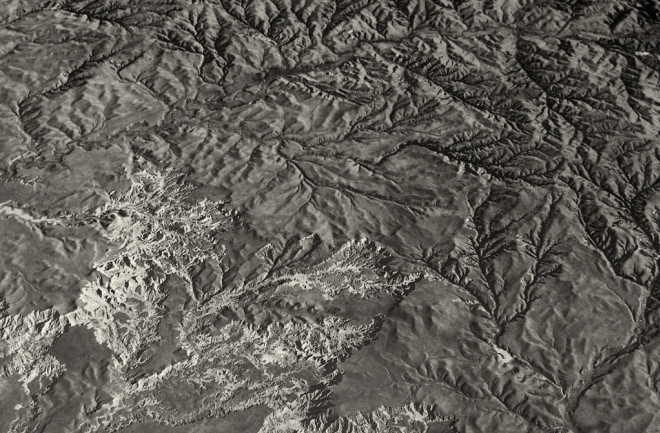 An iPhone photo of the Badlands and part of Pine Ridge in South Dakota. (Photograph: © Tom Yulsman) Pic of the Day I spent most of the day in meetings yesterday, so I did not have an opportunity to go out and shoot a Pic of the Day photo. As an alternative, I offer this black and white image of the Badlands and part of Pine Ridge in South Dakota. The land in this photo is within the Ogalala Lakota Nation (also known as the Pine Ridge Reservation). Click here for a Google Maps image of the area. I shot the photograph with my iPhone a little over a year ago toward the end of a flight from Frankfurt, Germany to Denver. I got to thinking of it last night as I was preparing to reverse direction next week. I'll be heading to Tromsø, Norway (via Frankfurt), where I'll be reporting from the Arctic Frontiers conference. I'll have more to say about that soon. Back to the photo... The bright eroded landscape consists of sedimentary rocks within the Sharps Formation, which is exposed in the more southerly parts of the Badlands. The Sharps Formation consists of silty material and some volcanic ash that was deposited between 28 million to 30 million years as the climate was drying and cooling. At this time, "grasses were developing on the plains of North America and herbivorous animals were adapting to utilize this new resource," according to an analysis of the geology of the area published in the journal PLO One. "The carnivores of course followed their prey onto the plains." As a result, the Sharps Formation is fossil rich — as is the Brule Formation to the north in Badlands National Park. Both tend to form the more rugged peaks and canyons of the Badlands. And both are part of the White River Group. You can see a bit of the actual White River meandering in the lower left corner of the photo (as well as a bit of the aircraft window I was shooting through). For a panoramic view of the Badlands from the ground (to the north of my photo), click on the image below from the National Park Service:

A panorama consisting of photos stitched together in Adobe Photoshop. The buttes are along Badlands Loop Road in Badlands National Park. (Source: Wikimedia Commons/National Park Service) Returning to my aerial photo, have a look at the darker incised landscape in the upper right. Here, streams have eroded down into Pine Ridge, a landscape of rolling prairie with some ponderosa pine on Ogalala Lakota lands. The reservation, Wazí Aháŋhaŋ Oyáŋke in Lakota, was established in 1889 in the southwest corner of South Dakota. It is 3,469 square miles in size, making it the eighth largest reservation in the United States. Here's a bit of history from the Ogalala Lakota Nation's web site:

Pine Ridge is the site of several events that marked tragic milestones in the history between the Sioux of the area and the United States . . . government and its citizens. Stronghold Table, a mesa in what is today the Oglala-administered portion of Badlands National Park, was the location of the last of the Ghost Dances. The U.S. authorities' attempt to repress this movement eventually led to the Wounded Knee Massacre on December 29, 1890. A mixed band of Miniconjou Lakota and Hunkpapa Sioux, led by Chief Spotted Elk, sought sanctuary at Pine Ridge after fleeing the Standing Rock Agency, where Sitting Bull had been killed during efforts to arrest him. The families were intercepted by a heavily armed detachment of the Seventh Cavalry, which attacked them, killing many women and children as well as warriors. This was the last large engagement between U.S. forces and Native Americans and marked the end of the western frontier.

For information about the Ogalala Lakota people today, see this in-depth story in National Geographic.