Baby, it's cold outside — but global warming has not taken a Thanksgiving break 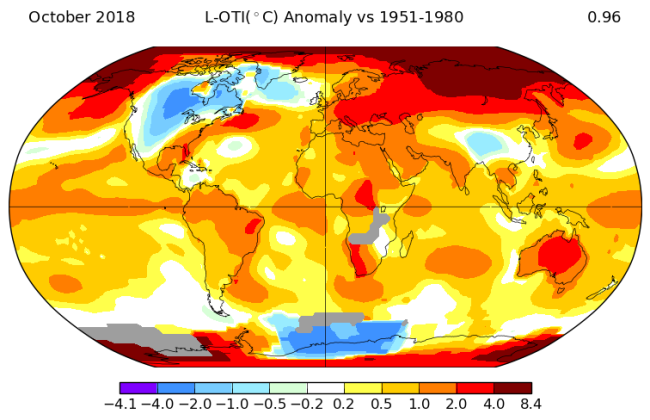 This global anomaly map compares temperatures in October 2018 to the 1951 to 1980 base period. (Source: NASA GISTEMP) It sure is cold outside — at least in the northeastern United States. In fact, some portions of the region could experience their coldest Thanksgiving on record. Blame it on an Arctic blast that is sending temps plummeting to levels normally associated with the dead of winter, not turkey day. It's called weather, not climate — a distinction that the President of the United States either doesn't care about, or doesn't understand (or perhaps both?): https://twitter.com/realDonaldTrump/status/1065400254151954432 In fact, analyses released by both NASA and NOAA just prior to Thanksgiving show that October 2018 was the second warmest such month in records stretching back to the late 1880s. Moreover, 2018 is on track to be the fourth warmest on record, and the fourth in a row at more than 1 degree C above temperatures that prevailed in the late 1800s. Here's what the long-term trend of global temperature looks like, including a prediction for how 2018 will wind up: https://twitter.com/ClimateOfGavin/status/1063106429530333184 The prediction is by climate scientist Gavin Schmidt, Director of NASA's Goddard Institute for Space Sciences — one of a handful of agencies worldwide that track global climate. And here's how this year stacks up so far against the same January to October period in 2015, 2016 and 2017: 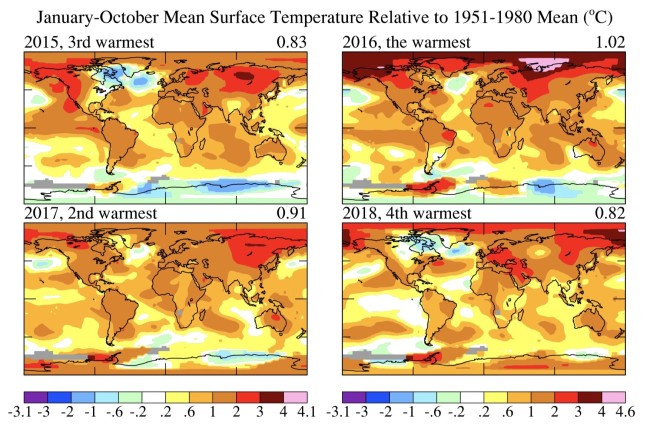 Comparison of global temperature so far this year to the same Jan-Oct period in 2015, 2016 and 2017 . (Source: Columbia University web pages maintained by Makiko Sato) The 10 month, January-October period in 2016 was the warmest such period on record, and that year went on to be the warmest year. Temperatures received an extra boost in 2016 by a powerful El Niño, which has since faded. But as the red, orange and yellow colors dominating the maps above show, very warm global temperatures obviously have not faded with it. And guess what? Another El Niño is very likely on the way — probably a weak one. But even so, it may well give global temperatures a bit of an upward push during at least part of 2019. Meanwhile, we can expect weather to happen as it always does, bringing frigid Arctic outbreaks from time to time. And politically motivated presidential Tweets notwithstanding, we can also expect the long term trend of human-caused warming to continue.