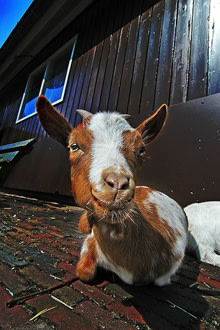 DISCOVER has covered many of the high-tech ways that people have tried to lower their energy consumption. Real estates developers in Los Angeles, however, have turned to an old-fashioned low-tech way to clear land for redevelopment: goats. Rather than using gas-burning weed trimmers to remove the patchy plants from this plot of land near 4th and Hill streets, the Los Angeles Community Redevelopment Agency brought in 100 goats, erected an electric fence, and set the creatures to munching. Goats have a tendency to wander and ignore fences, however, so George Gonzales watches over the group. His wife, Liz, acts as the veterinarian, in case all that eating makes the goats sick. As you might imagine, a herd of goats in the middle of L.A. has drawn a few stares and double-takes; the pictures of these wild grazers surrounded by the sprawl of Los Angeles are pretty funny. Passers-by took pictures, made jokes about goat barbecue, and suggested that the street musicians should start playing songs from "The Sound of Music." Goat power isn't just less polluting than running a bunch of mechanical equipment, either; the redevelopment agency is paying $3,000 for the goats to clear the area, which will eventually become the home of a California Plaza tower. A crew of men would cost $7,500 for the same job. Woodrow Wilson once had sheep on the White House lawn, and this low-tech wisdom could be on the rebound. In April, Turin, Italy replaced its lawnmowers with flocks of sheep in two public parks, for instance. Given that the tradition of having a lawn came from wealthy landowners, many of whom had sheep to keep the grass short, it's nice to see animals doing some of the work, rather than fossil-fuel burning machines.