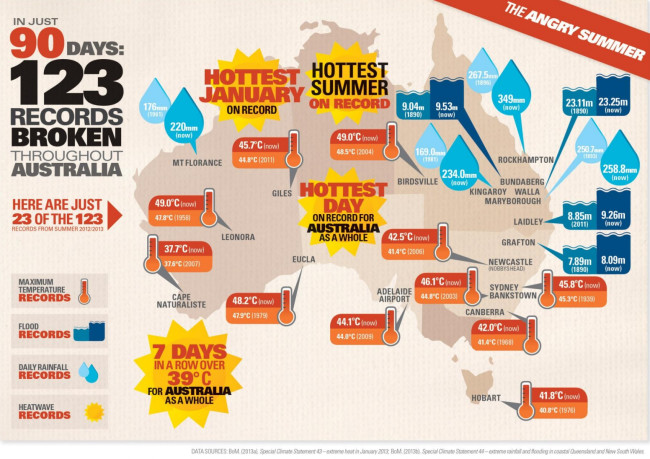 Yesterday, an Australian government commission just came right out and said it: "Australia's Angry Summer" of extreme weather was "made worse" by climate change. (The 'Angry Summer' thing, including the upper case, was their's, not mine.)

As the graphic from the commission report shows (above), that weather has included unprecedented heat, catastrophic brushfires, and deadly floods.

Today, I'm wondering what my colleague at Discover, Keith Kloor, will make of the report, given his post today in 2009 [don't ask how that error happened!] on "Fetishizing Extreme Weather" — as well as the graphics in my post here, which I'm hoping will dramatize and also contextualize the findings of Australia's Climate Commission.

But before we get to those images, here's the gist of the report:

The extreme weather made international news in January when an unprecedented heat wave across almost all of the country shattered one record after another, and helped to trigger a spate of rampaging brush fires. So, on to the images... Here's what the Fire Weather Index for Australia looked like back in early January

— a measure in which the red and yellow colors indicate higher wildfire risk:

The Australian fire weather index for Jan. 8 of this year. (Source: Center for Australian Weather and Climate Research.) The extremely high risk portrayed in that image manifested on the ground in rampaging bushfires that swept across parts of southern Australia and Tasmania. Here's a satellite image showing smoke plumes billowing from multiple fires burning in Tasmania on Jan. 8: 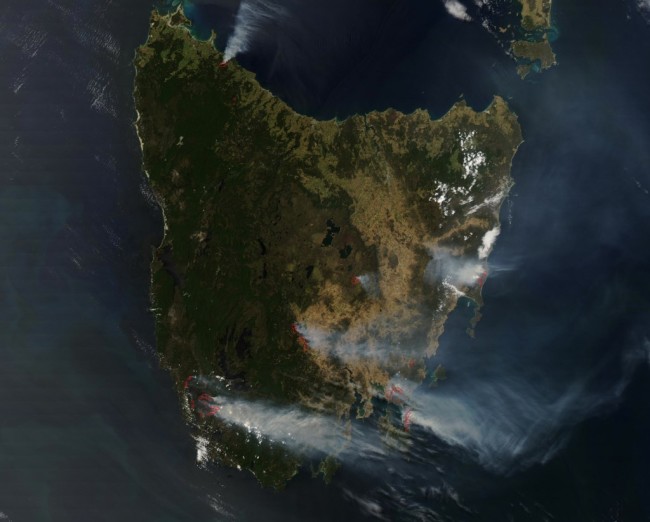 Smoke plumes from multiple fires burning in Tasmania are visible in this image captured on Jan. 8 from the MODIS instrument on board NASA’s Terra satellite. After the conflagrations came the deluge — extreme rainfall that caused deadly flooding in Queensland and New South Wales in the eastern part of the country. The Australian Climate Commission report illustrated the extreme rainfall with this graphic: 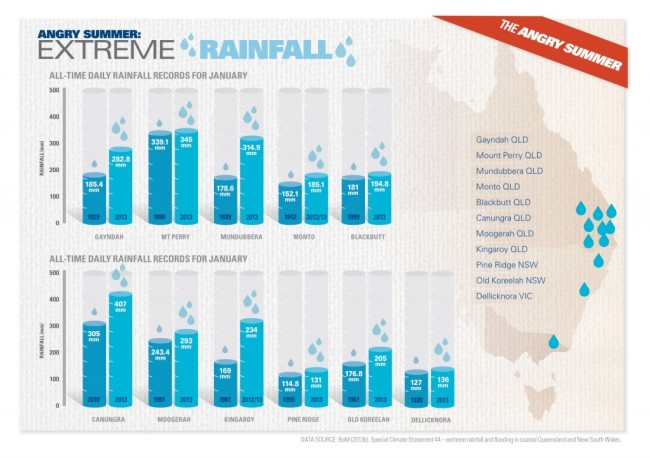 Click on the image for a larger version. (Courtesy "The Angry Summer," Australia Climate Commission) Here are before and after satellite images of the flooding that followed the rains, from NASA's Earth Observatory 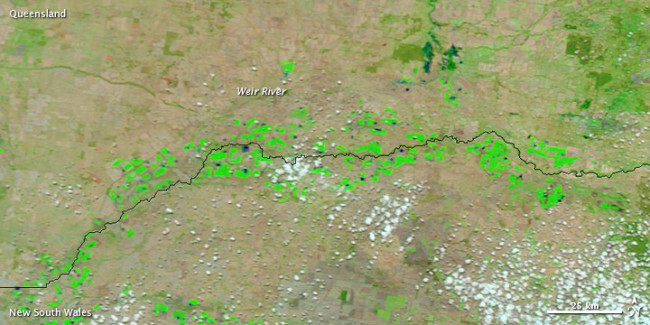 The MODIS instrument on NASA’s Terra satellite captured this image of relatively normal conditions along a network of rivers on the Queensland New South Wales border on Jan 23, 2013. It uses visible and infrared light to distinguish between water and land. Water varies in color from electric blue to navy. Vegetation is bright green and bare ground is earth-toned. (Image: NASA Earthobservatory) 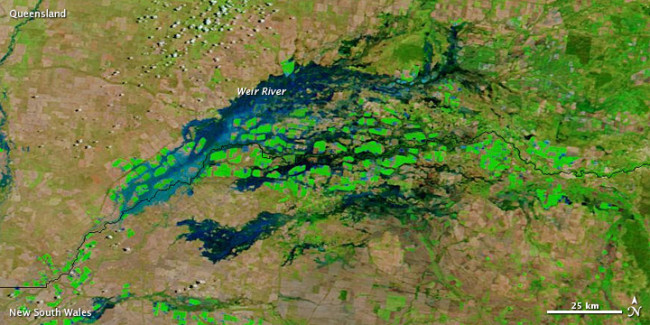 This image was captured by the MODIS instrument on Feb.4, 2013, as flooding was occurring. The report is cautious in blaming the flooding on climate change, using the word "influence" instead:

The extreme rainfall experienced on the Australian east coast has been influenced by the shifting climate, although determining the nature of that influence is more complex than for temperature-related extreme events.

That said, it does draw a clear connection between increasing sea surface temperatures and extreme rainfall:

The basic physics that underpin the connection between a warming climate and more rainfall are well known (Figure 13). Higher surface ocean temperatures drive more evaporation, leading to more water vapour in the atmosphere. This, in turn, leads to more precipitation (rainfall, snow or hail).

What were sea surface temperatures off Australia's coastline like in the run up to the extreme rain? Here's an image from NOAA

showing how they departed from the long-term average on Jan. 24, 2013:

In this image, based on satellite measurements, yellow, orange and red tones indicate warmer than normal sea surface temperatures. (Image: NOAA Office of Satellite and Product Operations) Lastly, I thought it would be interesting to see how much fire activity there is in Australia today. So here is a screenshot of a Google Earth image showing the locations of all fires detected by the MODIS instruments

on NASA's Aqua and Terra satellites during the past 24 hours: 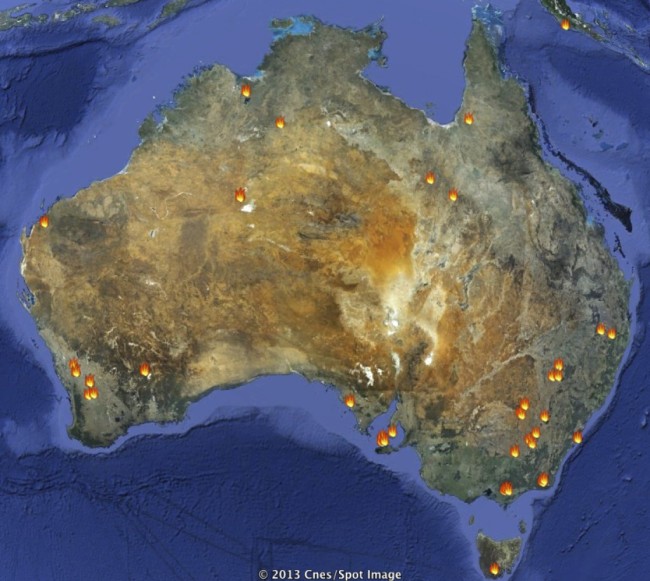