Smoke From Australian Bushfire Blows Halfway Around the Globe

Satellites have detected smoky pollutants crossing the Pacific and even moving over the South Atlantic Ocean. 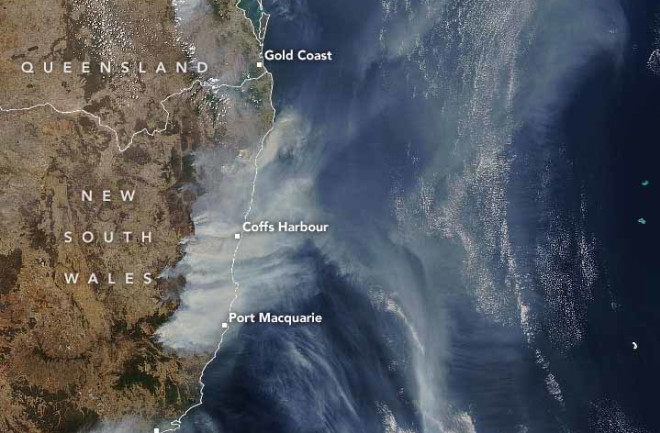 Bushfires continue to blaze across huge bone-dry swaths of Australia.

The state of New South Wales in the southeast has been hardest hit, with more than 6,300 square miles scorched so far.

Imagine the entire Los Angeles metropolitan area — and then some — going up in smoke. That's how much territory has been scorched, with new areas succumbing every day.

Locally, thick smoke from the blazes has smothered Sidney, causing terrible air quality. But the smoke has been carried much further than that.

In fact, particles from the Australian bushfire smoke have blown half way around the planet.

You can see the smoke in the NASA animation above. Based on satellite data and modeling, it shows shows black carbon from the fires blowing all the way across the Pacific Ocean to South America — and then out over the South Atlantic. This is a distance of more than 11,000 miles!

Black carbon consists of tiny aerosols that can rise high into the atmosphere, where they can linger for months.

In this case, smoke has indeed risen very high — up to eight miles up. That's much higher than scientists can account for, according to NASA.

Smoke that rises that high is typically carried by pyrocummulus clouds — more colloquially known as fire clouds. These are like thunderstorm clouds, except they form as updrafts form over raging wildfires and punch all the way up into the stratosphere, carrying smoke with them.

But scientists have seen no evidence of pyrocumulus clouds forming over the Aussie blazes, according to NASA. So they're unsure how smoke got high enough to be blown across such vast distances.

Over the past 19 months, large portions of Australia have experienced a dearth of rainfall — with some regions recording their scantiest rainfall on record, as seen in this map. (Source: Australia Bureau of Meteorology)

As the map above shows, large portions of Australia have been in the grip of drought for many months. Some areas, including in New South Wales, have been record dry.

Although major bushfire outbreaks have burned even more territory in the past, this time a number of factors appear to be unprecedented. For example, in a particularly bad bushfire outbreak during 1974 in New South Wales, the burning occurred farther to the west. Here, heavy rains had caused copious amounts of burnable biomass to accumulate in outback grasslands.

This time, the fires are burning in the typically wetter, more forested eastern parts of the state. But now, woody fuels have become very dry due to the lack of rain.

By making Australia warmer and drier on average than it once was, human-caused climate change is upping the odds that bushfire outbreaks like the ones we're seeing will occur.