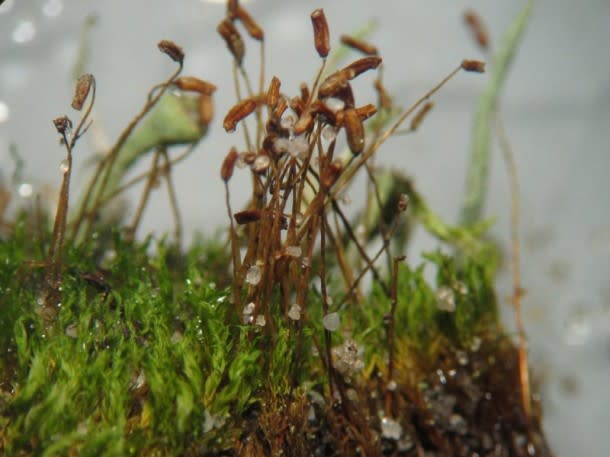 Ah, Antarctica. A vast expanse of ice, interrupted by mountains, ice... and more ice (with the occasional penguin). But in the East of the continent and on the Windmill Islands

are amongst the hardiest flora in the world, providing a home for a variety of minute life

. They survive being covered in snow most of the year, only growing briefly during the summer months, watered by snowmelt. Except for in-person observations made over the last two decades, little definitive was known about these oases of diversity, like their age or how they might respond to changes in climate. But now, some of the moss's secrets are out. A recent study

in the journal Global Change Biology found that some of these plants must be more than a century old, and a few may even be thousands of years old, said researcher and study author Sharon Robinson via email. On average these mosses grow at the glacial speed of 1 millimeter per year—and some of the turfs are meters thick. That means many of these unassuming mossy carpets were there when humans first made it to the continent a century ago—and likely well before. "These mosses are effectively the old growth forests of Antarctica—in miniature," Robinson said.

To date the mosses, the researchers used mass spectrometry to measure levels of carbon-14, a radioactive element released into the atmosphere in significant quantities during the "bomb spike" of the late 50s and 60s, when many nuclear weapons were tested above ground. (The same technique has been used to to date bristlecone pines

, reveal the age of arterial plaques

, and show that the total number of fat

changes little over a person's life. Find a good description of the dating process here

.) After carbon-14 spread throughout the globe, tiny amounts of the gas were taken up by the slow-growing mosses. By calibrating measurements of the moss's radioactive carbon with concentrations of carbon-14

in the Southern Hemisphere since 1955, and other similar datasets, researchers reconstructed the moss's growth history over the last 50 or so years. The researchers also correlated the age and growth rates of the moss with local climate measurements taken in the last few decades. They found the plants grew slowest when winds were highest; even frigid air can evaporate water and dry out plants. The key here is the availability of liquid water: Despite the fact that Antarctica is home to most of the Earth's fresh water, most of it is locked up in ice. Moss also grew faster, unsurprisingly, with warmer temperatures. Until this study, the researchers write, there was little evidence to suggest the moss responded so strongly to the climate. "Our results point to a profound influence of recent climate change on the Antarctic flora," Robinson said