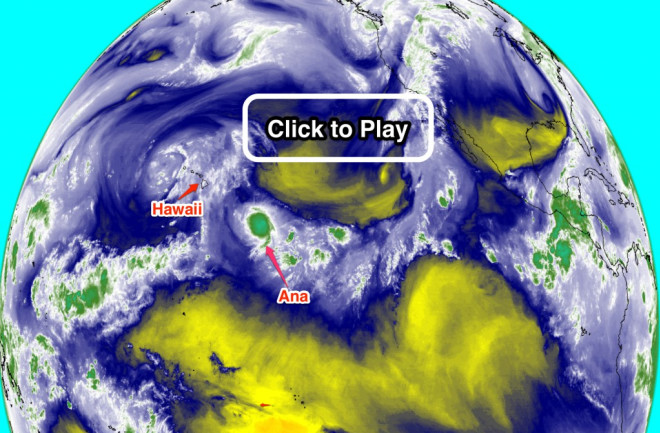 A screenshot of an animation showing the development of Tropical Storm Ana, as seen in the infrared by the GOES-15 weather satellite. The animation rocks back and forth to emphasize the effect of two converging tropical waves. (Source: CIMSS Satellite Blog) The storms just keep on coming. Earlier this week, Typhoon Vongfong whacked Japan and Tropical Cyclone Hudhud slammed into India. With maximum sustained winds of 135 miles per hour, Hudhud left at least 22 dead and caused much mayhem. Oh, and did I mention Tropical Storm Fay, which knocked out power to much of Bermuda last weekend? Now, we've got Tropical Storm Ana in the Pacific, which is heading toward Hawaii, and Hurricane Gonzalo in the Atlantic taking aim on Bermuda — and perhaps Newfoundland on Sunday. Ana is currently forecast to strengthen into a hurricane by Friday. The storm's predicted track would take it just south and west of the Big Island of Hawaii, but depending on how things develop it could veer closer or farther away. (See Ana's forecast track here.) Click on the screenshot above to see a looping animation showing how Ana evolved. The animation, which rocks and back and forth, shows Ana emerging from the interaction of two tropical waves, one coming from the east and the other from the west. (Kudos to the Satellite Blog of the Cooperative Institute for Meteorological Satellite Studies for this awesome animation. Head over there for more spectacular imagery.) Should Ana actually hit one of the Hawaiian Islands, it would be an exceedingly unusual event. Since 1949, Hawaii has taken direct hits from just two hurricanes and two tropical storms. One of the latter was Tropical Storm Iselle, which made landfall on the Big Island's southeast shore on Aug. 8 this past summer, where it killed one person and caused a lot of damage. (For more detail about Ana and the handful of cyclones that have hit Hawaii, see this post by Jeff Masters at the Weather Underground.

A view of Hurricane Gonzalo acquired by NASA's Terra satellite on Wednesday, Oct. 15, 2014 as it swirled north of the Virgin Islands and Puerto Rico at lower right and the bigger island of Hispaniola at lower left. (Source: NASA) Meanwhile, Hurricane Gonzalo is the first Category 4 Hurricane of the Atlantic since 2011. It has already caused one death and much destruction in the Lesser Antilles Islands. With winds at 140 miles per hour, Gonzalo is a very dangerous storm. You can see Gonzalo in the image above, captured by NASA's Terra satellite yesterday. Atmospheric scientist Brian McNoldy of the Washington Post's Capitol Weather Gang, is calling it a "monster". Already, its Accumulated Cyclone Engery — a measure of activity and potential destructiveness of individual storms — is quite high, according to McNoldy:

In terms of accumulated cyclone energy (ACE), Gonzalo has already contributed more to the seasonal total than all other storms except for Edouard, but it has several days left to keep the tally going. As of 8 a.m. Wednesday, 2014′s ACE has climbed to 53 percent of an average Atlantic hurricane season.

This past Sept. 16th, Edouard became the first major hurricane in the Atlantic since 2012's Sandy. Now, Gonzalo is evidently eclipsing that.