As the 'blue Arctic' expands thanks to global warming, an icebreaker finds no ice to break 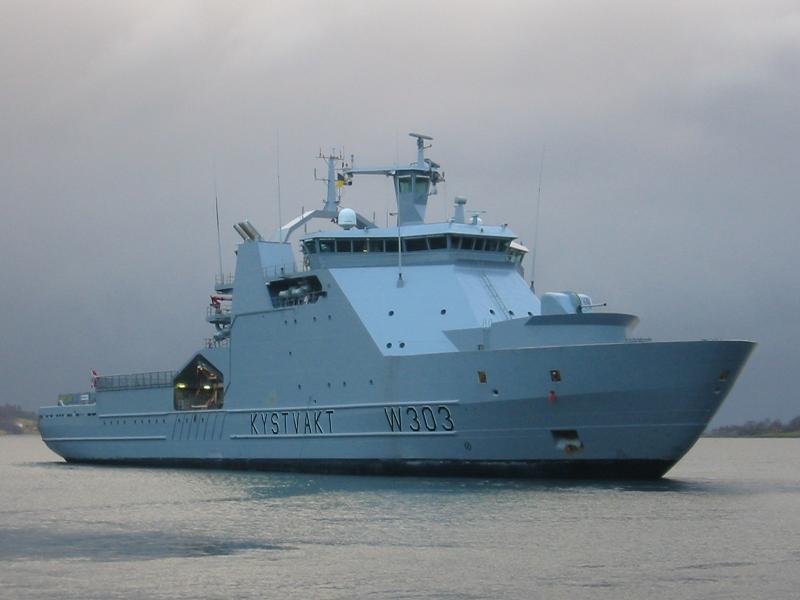 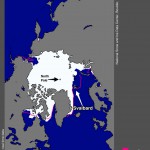 Dec. 2015 average Arctic sea ice extent compared to average. (Source: NSIDC) At this time of year, sea ice usually closes in around Svalbard's northern and eastern coasts. But not this year. The sturdy 340-foot-long, 6,375-ton KV Svalbard had no ice to break, reports Oddvar Larsen, the ship's First Engineer. I spoke with Larsen and other sailors on board the icebreaker during the kickoff event of the 10th Arctic Frontiers conference in Tromsø, Norway on Jan. 24, 2016. This is the first post of several I have planned based on reporting I did at the conference. (Please see the note at the end for important details about the reporting that went into this story.) Larsen told me that he has observed "big changes" in the Arctic during his nearly 25 years at sea. In addition to shrinking in extent, "most of the ice we encounter now is young — just one year old." In the past, thicker, multi-year ice was dominant, including old ice greater than nine years of age. Today that oldest ice is almost gone. You can watch the Arctic's old sea ice disappear, literally before your eyes, in this animation: https://youtu.be/lG87n5DzdtI The lack of sea ice that Oddvar Larsen and his crewmates experienced around Svalbard this winter wasn't just a small geographical anomaly. At 301,000 square miles below the long-term average, Arctic sea ice extent in December was the fourth lowest for the month in the satellite record. To give you a sense of just how much below average that extent was, consider that 301,000 square miles is almost the size of California, Oregon and Washington combined. Since December, conditions have not improved. In fact, the extent of Arctic sea ice overall now is at record low levels for this time of year: 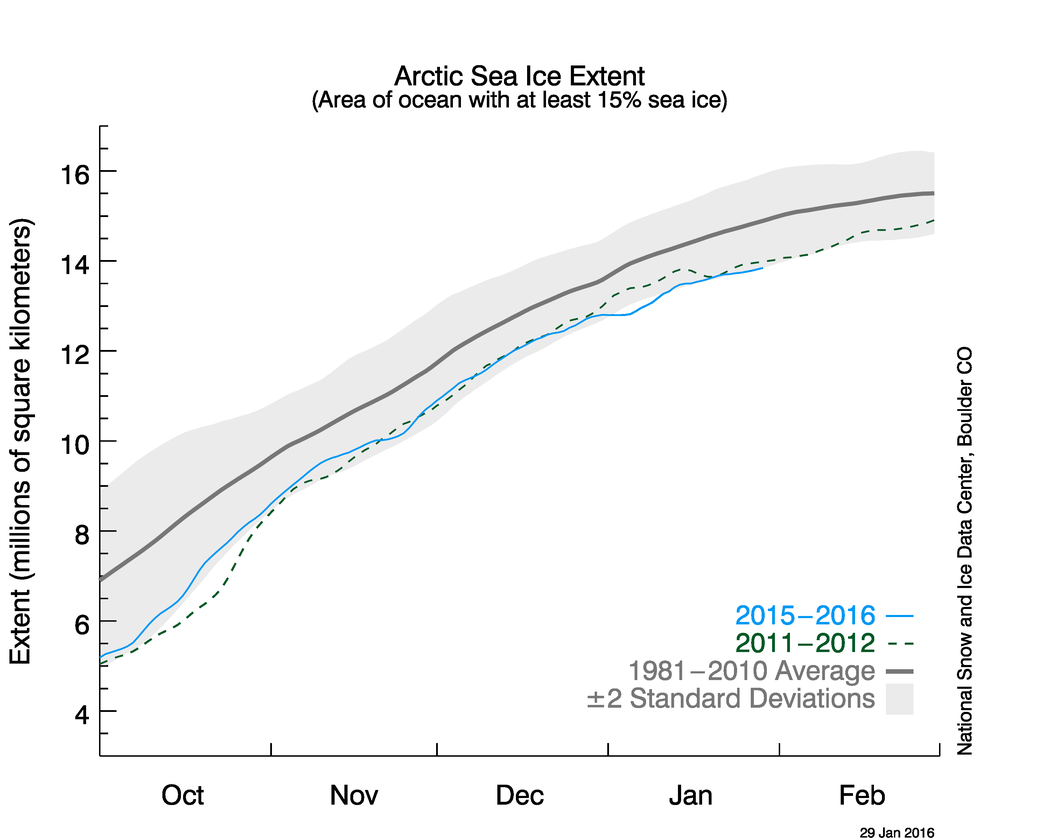 A time series of Arctic sea ice extent for the months October through February showing the long-term average, 2011/2012, and how conditions have played out so far in the 2015/2016, shown with the blue line. Note that ice extent is now trending lower than in 2011/2012, which went on to set a record low. (Source: NSIDC) As Oddvar Larsen's experience suggests, the lack of sea ice that his icebreaker recently encountered around Svalbard comprises just one data point in a broader, long-term trend. Since satellite monitoring began in 1979, Arctic sea ice extent in December has declined at a rate of 3.4 percent per decade. That's in winter, when the region is typically gripped by polar cold. In September, when Arctic sea ice reaches it's lowest annual extent after the relatively warm months of summer, the decline has been much more rapid: 13.4% per decade. 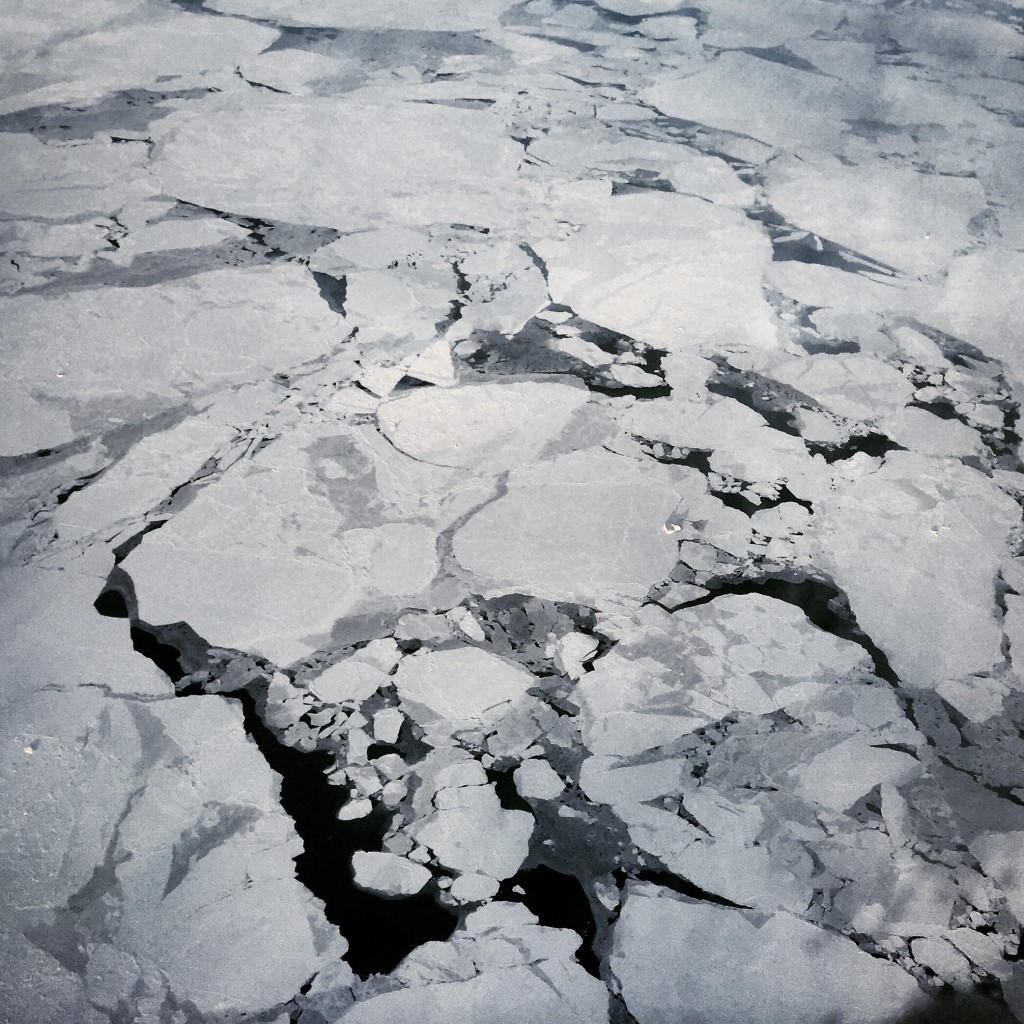 Patchy sea ice in Baffin Bay between Greenland and Canada, as seen from 35,000 feet on a commercial aircraft, Jan. 29, 2015. (iPhone photo: ©Tom Yulsman) The shrinking geographic extent of Arctic sea ice is just one measure of the impact of human activities on Earth's climate. Its total volume is another — and that has been declining over the long run too. If you pay too much attention to data cherrypickers looking to cast doubt on global warming, you'll hear a different story. But the full data record, backed up by the personal experiences of sailors like Oddvar Larsen and others (keep reading; more to come below...), show conclusively that Arctic sea ice continues to decline. Given the heat energy building up in Earth's natural systems from greenhouse gas emissions, we shouldn't expect anything different. In the end, it's really just a matter of physics. Moreover, fully 90 percent of the heat energy our activities are generating has been going into the oceans. How much energy are we talking about? To help Arctic Frontiers' conferees wrap their heads around that question, a geoscientist at Columbia University's Lamont-Doherty Earth Observatory offered a startling comparison. Citing recent research, Peter Schlosser noted that since 1997, the heat energy going into the oceans has been equivalent to "one Hiroshima-sized atom bomb being exploded every second for 75 years." The result: an increasingly "blue Arctic" whose relatively dark waters (compared to white sea ice) are helping to amplify warming in the high north even further. And this, in turn, is possibly contributing to extreme events like the brutal winter weather that parts of the United States have endured in recent years. In her own talk at the conference, NASA's chief scientist, Ellen Stofan, explained the process this way: "As we expose more ocean, the dark water absorbs more heat, and that heat is pumped back into the climate system as added energy." This Arctic amplification process, she added, could be implicated in "a lot of the extreme weather events that have been occurring." A connection between shrinking Arctic sea ice, Arctic amplification, and extreme weather is supported by research conducted by Jennifer Francis at Rutgers University, including a paper published last June. Here's how the connection works, at least theoretically: The disproportionate warming experienced in the Arctic has weakened the difference in temperature between the lower and higher latitudes, causing the jet stream to become wavier for longer periods of time. The result: deep meteorological ridges and troughs that tend to be more persistent. 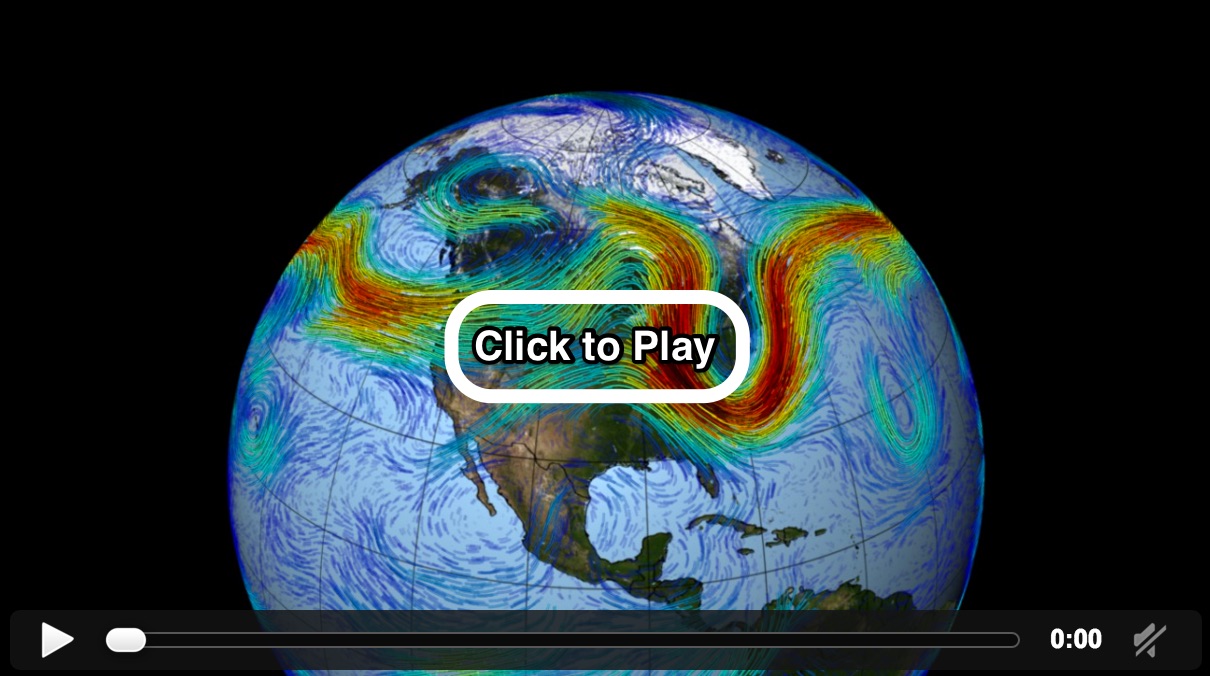 A NASA animation shows waviness developing in the polar jet stream, creating ridges and troughs. Arctic warming may be causing these features to become more persistent, thereby contributing to extreme weather events. (Source: NASA) In the ridges, warmth flows up from the south; in the troughs, wintry weather spills from the north. And in both cases, longer-lasting jet stream waviness tends to cause these weather patterns to stick around for awhile. "As emissions of greenhouse gases continue unabated, therefore, the continued amplification of Arctic warming should favor an increased occurrence of extreme events caused by prolonged weather conditions," Francis and her colleague concluded in their recent paper. It's an intriguing theory. But it's also still the subject of a robust scientific debate. 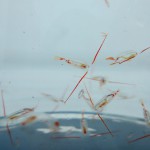 Sea ice zooplankton: Calanus glacialis. (Allison Bailey / Norwegian Polar Institute) Declining sea ice is known to be driving other changes in the Arctic, including to a surprisingly vibrant realm of life thriving in the harshest of environments. These species include single-celled algae that live under and even within the ice, and shrimp-like zooplankton that feast on these organisms. As the frozen mantle over north polar waters has declined, "the abundance and diversity of organisms living under the ice in the Arctic has been going down," said Jan-Gunnar Winther, director of the Norwegian Polar Institute. Even as some species at the base of the food chain have been declining, research also shows that warmer Arctic waters have been luring fish farther and farther north. And they are not alone. Aboard the KV Svalbard, the Commander of the Norwegian Coast Guard, Commodore Sverre Nordahl Engeness, noted that fishermen are also being lured north into the increasingly blue Arctic. Joining them have been ships seeking to navigate the Northern Sea Route, and vessels involved in oil and gas exploration — and production too. "This is affecting the way the Norwegian Coast Guard operates in the Arctic," Engeness says. "We have larger areas that we must operate in" — for search and rescue, guarding against illegal fishing activities, and protecting Norway's sovereign interests. 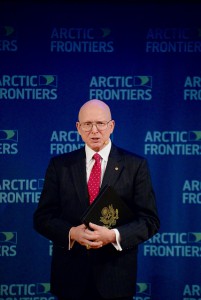 Admiral Robert J. Papp, Jr., speaking at the Arctic Frontiers 2016 conference. (Photo: Pernille Ingebrigtsen/Arctic Frontiers 2016) The sailors of Norway's KV Svalbard have not been alone in their personal experiences of climate change. Admiral Robert J. Papp, Jr., retired Commandant of the U.S. Coast Guard, has experienced them firsthand too. The Arctic Ocean "is now opening up" for economic activities. "Will we be ready?," asked Admiral Papp, now the U.S. Special Representative for the Arctic. I asked him a what kinds of changes he has seen himself since he began his career on the seas 40 years ago. Here's what he said:

In 1975, my first assignment was to a small Coast Guard ship, which was home-ported in Adak, Alaska in the Aleutian island chain . . . Our area of responsibility was the Bering Sea, the Arctic Ocean, and the Gulf of Alaska. As a young sailor, and someone who aspired to be a ship captain, there was no better training ground because I saw the absolute harshest weather on Earth on a sustained basis. Weather that you will find on a sustained basis in the Bering Sea for sometimes weeks on end is at a level that you would call a hurricane if it was in the Caribbean. Except in the Caribbean a hurricane passes through within 48 hours and it's over. In the Bering Sea, you can experience it for weeks.

Admiral Papp experienced more than severe weather while he served in the Coast Guard back in the 1970s:

In July I 1976 crossed the Arctic Circle for first time in the Bering Straight. We ran into sea ice that we could not get through. We ultimately wound up having to turn around to avoid damage to the ship because the ice was so bad.

He also got a more synoptic view:

In 1976, I flew on a helicopter, and there was ice as far as the eye could see. In 2010, I flew in a Gulfstream aircraft to the same location at the same time of year, and as far as I could see, which was probably at least 100 miles, there was no ice. What I saw in 1976 was normal then. What I saw in 2010 was the new normal. I'm telling you what you know already. The ice has receded. But for me it was a very dramatic demonstration of how much things had changed over the course of my career of 40 years, and it gave me a greater sense of urgency for getting the United States prepared for increasing activity in the Arctic.

For most people, 40 years is a very long time. But from the perspective of NASA's science chief, Ellen Stofan, it's the blink of an eye:

As a geologist, I’m used to thinking of things that are rapid as happening on a timescale of 10 to 20 million years. When you see the rate of change happening in the Arctic, it is quite concerning. As scientists we’re not used to seeing such a rapid pace of change . . . This is a warning of the worst effects of climate change.

|Note:I attended the Arctic Frontiers conference as a journalist, as a professor of journalism, and as a moderator for one conference session. Also, in the interest of full transparency: My expenses, as well as those of other journalists from the United States, Canada and Europe, were covered by a program of the Norwegian Foreign Ministry designed to encourage coverage of the conference and Arctic issues in general. As in past years, I wrestled with the issue of journalistic independence. I decided to accept the support because otherwise these stories would not be told. As in the past, the Foreign Ministry exercises no input on the stories I choose to cover, and on how I cover them. |