A comparison of satellite images showing the Rocky Mountains. Snowpack in April of 2016 was much more substantial than it is now. (Images: NASA Worldview. Animation: Tom Yulsman) In the western United States, the most important reservoirs are not the manmade ones along rivers, but the natural ones high up in our mountains: the snowpack that accumulates all winter, peaking in April. As the animation of satellite images above shows, this crucial source of water is looking significantly depleted as we head toward the hot and dry conditions of summer. The animation consists of images acquired by NASA's Terra satellite centered over the Rocky Mountains in Colorado and New Mexico. Parts of Wyoming, Utah and Arizona also are visible (as well as the High Plains to the east). One image was acquired on April 21, 2016, and the other on April 24th of this year. The difference in snowpack is pretty dramatic. Runoff from this region supplies some 40 million Americans with their water needs. Here's how the snow-water equivalent (a measure of how much water snow contains) compares to the long-term median values for today, May 3: 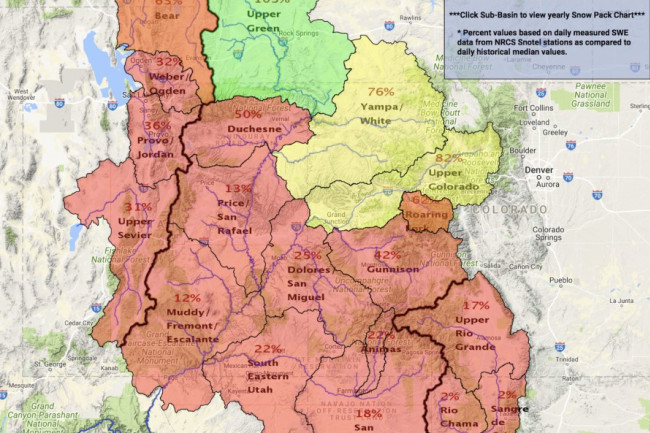 Snowpack conditions as of May 3, 2018 in the upper Colorado region. (Source: U.S. Bureau of Reclamation) Given the dearth of snow, less than half of the average amount of runoff is forecast to run off from the mountains into Lake Powell along the Colorado River between April and August. As of May 1st, the forecast is for flows into Lake Powell — the second largest reservoir in the West — to reach just 43 percent of average. If conditions turn out to be unusually warm and dry, that number could drop significantly. The situation is particularly grim in New Mexico, with some areas having essentially no snow. With runoff dramatically depleted, a 19-mile stretch of the Rio Grande has already dried up. Portions of the river don't typically go dry until August. Elephant Butte Reservoir, New Mexico's largest, is forecast to be at just 5 percent capacity this summer. What we're experiencing today is no fluke. The average snowpack in U.S. western states has dropped by 15 to 30 percent since 1915. As I noted in a story back in March:

The water in that lost snowpack is comparable in volume to Lake Mead. With a maximum capacity of 9.3 trillion gallons, Mead is the West’s largest manmade reservoir.

The cause is not so much declines in snowfall as warming temperatures, in large measure a result of humankind's emissions of greenhouse gases. In fact, recent studies have shown that "a given level of winter snowpack today results in less river runoff than in the past," according to a report issued in March by the Colorado River Research Group. The report compares a major drought in the 1950s to the ongoing 21st century drought. "The former had significantly less precipitation, yet the observed reductions in streamflow are quite similar," the report finds. Why? Warmer temperatures are causing more snow to turn directly into water vapor in the air without first melting. Hotter conditions are also increasing rates at which moisture is evaporating from soils, streams and lakes. And they've caused trees, bushes and other vegetation to become thirstier, so they draw more water out of the soil. New Mexico has seen a particularly significant warming trend. Average temperatures in the Rio Grande basin have risen a bit less than 1 degree F per decade between 1971 and 2011. Warming isn't the only way that we are influencing river flows in the West. Another is a phenomenon known as “dust on snow.” As the Colorado River Research Group puts it:

. . . snowfields in the Rockies are more frequently being painted with fine layers of dust that absorb sunlight and thus accelerate snowmelt. Winds now coat the Rockies with five to seven times the dust as seen in the early 19th century, in part due to land disturbances such as grazing that break up soils in the Colorado Plateau and Great Basin. The result, on average, is an earlier (by three‐weeks) start to the snowmelt season, and a projected five percent decrease in runoff (Painter et al., 2010).

The authors urge us to think in new terms about what's going on. The West has long experienced significant droughts, and that is unlikely to change. But a large part of the region, including the Colorado River Basin area pictured in the animation at the top of this post, is undergoing a long-term process of aridification, thanks to warmer temperatures, dust-on-snow, and other factors.

As the authors put it, this is "a period of transition to an increasingly water scarce environment—an evolving new baseline around which future extreme events (droughts and floods) will occur."