As Seen From Space: Russian Volcano Throws A Tantrum

An animation of true- and false-color satellite images of the eruption of Shiveluch volcano on Russia's Kamchatka Peninsula. The images were acquired by NASA's Terra satellite on March 25th, 2015. (Images: NASA Worldview. Animation: Tom Yulsman) Shiveluch is at it again. The volcano — one of the largest and most active on Russia's Kamchatka Peninsula — erupted yesterday, belching a giant plume of ash high into the atmosphere. You can see the plume in the animation above. I created it using two images captured by NASA's Terra satellite. In the natural color image, Shiveluch's eruption plume is brownish in color. In the false-color image, tiny water droplets make the plume appear white, which stands out starkly against the orange background. (In this false color scheme, orange is indicative of snow.) Make sure to scroll down for a spectacular video of the eruption of the Russian volcano as seen from space. But first... This was just the latest in a series of eruptions from Shiveluch. Strong explosions on March 16 rocketed ash plumes to an altitude 29,500 feet above sea level, according to the Global Volcanism Program. Look closely at the images in the animation at the top of this post and you can see evidence of previous eruptions. See that dark V-shaped feature? That's Shiveluch's ash on the snow. But why the 'V' shape? As NASA's Earth Observatory puts it:

Ash from volcanic eruptions can be swept in a narrow direction by the wind. When the wind changes direction so, too, does the location of the ashfall. 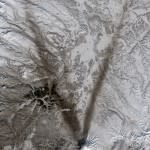 Source: NASA Click on the thumbnail at right for the Earth Observatory's image of the volcano and that V-shaped ashfall, acquired by the Landsat 8 satellite on March 23, just two days prior to the current eruption. And check out this earlier post from the Earth Observatory featuring satellite images and an animation of an eruption from Shiveluch on February 28, 2015: A Plume Advances Over Shiveluch Yes, this is one angry, tantrum-prone volcano. Here's what the most recent eruption looks like from the ground:

And below is a video showing what the eruption looked like from space. (Note: it's a large file so it may take awhile to load.) 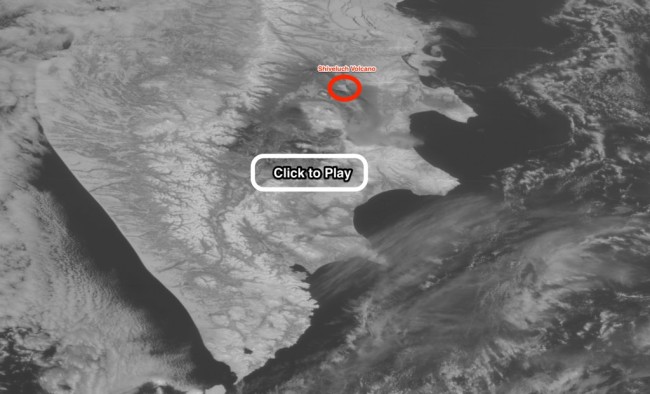 A screenshot from an animation of satellite images shows Shivleuch volcano erupting on March 25, 2015. Click the image to watch the animation. (Source: Cooperative Institute for Meteorological Satellite Studies) The animation, which was created by the Cooperative Institute for Meteorological Satellite Studies at the University of Wisconsin, consists of images captured by Himawari 8, a Japanese weather satellite. The resolution is very fine — just 0.5 kilometers. So an enormous amount of beautiful detail is evident in the landscape. (Thus, the large file size...)