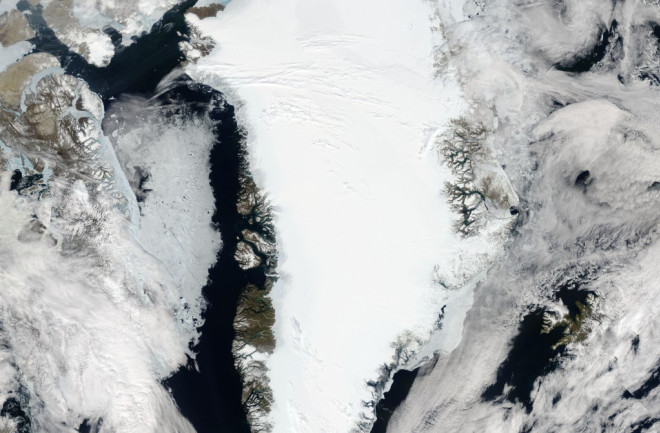 Greenland as seen by NASA's Aqua satellite on June 29, 2015. (Source: NASA Worldview) As brutal heat grips parts of Europe, Asia, North America and South America, another place is also experiencing a spike in temperatures — one that you may not have heard about. It's happening in Greenland, and high temperatures there over the past two weeks have caused a sudden jump in melting at the surface of the vast ice sheet (seen in that great expanse of white in the satellite image above). For more details about the heat elsewhere, including record-setting 100+ temperatures in places like the Netherlands, see Jeff Masters' recent post at Weather Underground. In this preliminary post I'll focus on Greenland. I say preliminary, because a report on the situation is probably coming from the National Snow and Ice Data Center a bit later in July. By then, it is entirely possible that conditions will have shifted. In fact, "it's not that unusual to see a spike," Ted Scambos of the NSIDC told me in an email. So we'll see. For now, though, check out what's happening:

In the graph above, the red line traces a sudden increase in the extent of surface melting in Greenland. (Source: National Snow and Ice Data Center) See that spike in the red line? That shows the extent of surface melting — which currently is above 40 percent of the ice sheet's surface. That's about twice as much as the long-term average for this time of year, as depicted by the dotted blue line.

Where the ice sheet meets the rocky coast: Blue melt ponds as well as darkening of ice and snow are seen in this satellite image showing part of the west coast of Greenland. It was acquired by NASA's Aqua satellite on June 29, 2015. (Source: NASA Worldview) Some surface melting is completely normal during the summer in Greenland. And actually, it got off to a slower than average start this year, thanks to a cold and snowy spring. But then, beginning in mid-June, the situation reversed. Melting on the surface of the ice sheet is caused by warm temperatures, and the 24 hours of daylight above the Arctic Circle, as well as darkening of the snow and ice, which causes less sunlight to be reflected away. Meltwater helps to darken the surface, as does particulates from wildfire smoke that has drifted over from elsewhere. More about this "albedo" effect in a moment. But first, here's what temperatures have looked like:

An animation showing how temperatures departed from the long-term average between June 17 and 30, 2015. In this animation, first keep your eyes on Greenland. Note the persistent blob of warm colors indicating anomalous warmth. The animation also shows hot temperatures forming over Portugal and Spain, spreading across much of western Europe and into parts of Central Europe. You can also see the persistent heat over Western North America that has fueled wildfires from California to Alaska and across a large swath of Alberta and Saskatchewan in Canada. What's up with that heat?

This is a map showing how geopotential height varied from the long-term average during the same period — June 17 through July 2. For a good explanation of geopotential height, go here. For our purposes, it's enough to know that where geopotential height anomalies are high, as indicated by warm colors, atmospheric pressure tends to be high, and temperatures tend to be warmer than average. Where the anomalies are lower than average, as shown with blues, pinks and purples, pressure and temperature tend to be relatively low as well. Now, check out the pattern: High pressure parked over Alaska, western North America, Western Europe — and Greenland. This pattern is connected to a wavy jet stream that has become stuck. For a post last week on Canada's raging wildfires, I created this graphic to illustrate the phenomenon. And here's what I said about it:

A study published earlier this month found new evidence that rapid warming of the Arctic due to human activities is causing the Northern Hemisphere jet stream to be wavier in a way that promotes extreme weather like the unusual heat now gripping much of western North America. (Not to mention the extreme cold that afflicted the U.S. Midwest and East Cost this past winter.) The research also finds that these contortions are occurring more frequently.

I also cautioned that this is an area of ongoing research, and there is disagreement among experts about whether Arctic warming really is connected to jet stream waviness. Whatever the cause, I'm curious to know whether any smoke from the wildfires in Alaska and Canada have drifted over to Greenland and caused dark particulates to settle on the snow and ice. The resulting darkening would decrease the surface albedo, resulting in less sunlight being reflected and therefore more melting.

Source: Polar Portal I've had a good look at satellite images, and I don't see any obvious signs of smoke drifting over to Greenland. But I'm a journalist, not a remote sensing expert, so it is entirely possible that I'm missing something. Perhaps the upcoming report from the National Snow and Ice Data Center will say something about this. For now, I'll finish with the map at right showing how the surface albedo of the Greenland Ice Sheet currently varies from the long-term average. Wherever you see red, the albedo is low. When you click on the thumbnail you'll go to the Polar Portal site, where you'll find lots of information about what's happening in Greenland, including a larger version of this map. As the Polar Portal explanation puts it:

Red areas indicate where melting and possibly black carbon from wildfire accumulating on the surface darkens the ice. Blue areas indicate where fresh snow or more snow than normal has accumulated. Albedo thus provides a convenient indicator of the competing effects of ice mass gain from snowfall and ice mass loss from melting. Melting ice tends to be darker (has a lower albedo) because melt causes ice crystals to round and if the melting point is reached, liquid water also lowers the snow and ice reflectivity. Any change in reflectivity thereby tends to amplify subsequent changes through a positive feedback loop. Thus, albedo is a very sensitive ice climate indicator.

I'll post on this subject again when the NSIDC comes out with its report. So please check back. In the meantime, for readers in the United States, I hope your holiday weekend is awesome (and not too hot!).